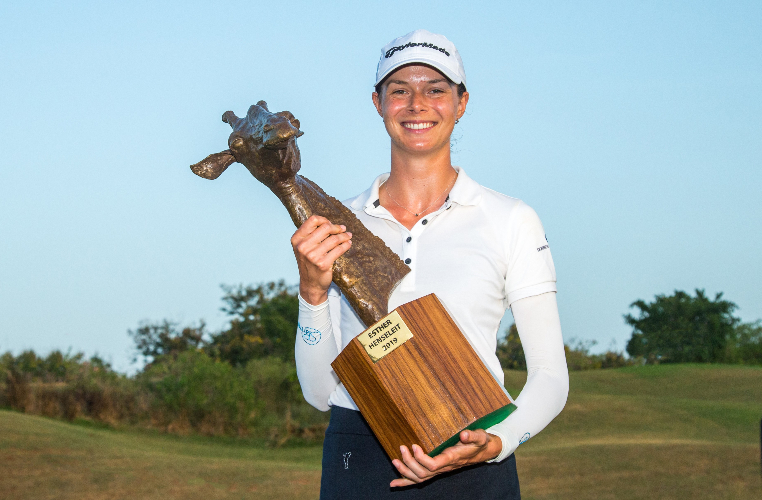 Germany’s Esther Henseleit was the winner once again at Vipingo Ridge as she successfully defended her Magical Kenya Ladies Open title.

In the Ladies European Tour (LET) curtain-raiser Henseleit’s victory, where she finished the tournament on two-under-par, also ensured she leads the 2022 Race to Costa del Sol with 500 points.

Despite a bogey on the first, Henseleit bounced back with birdies on two, three, six, eight and 11 to put her in a commanding position heading down the stretch.

But a dropped shot on 13 and then after finding the water on 17, the German knew she had to make par on 18 to close out the win.

“I played pretty good and holed some good long putts and I kept it together. At the first, I just pulled my driver a little bit left and was blocked to the green,” she said.

“I hit a good one into the green but couldn’t make the par putt. In the end, it was a bit of a struggle, but I made it and I’m pretty proud of my last few holes.

“I was shaking over the putt on 17 and I was shaking down 18 and especially that putt. I have been struggling with the putter over the last one and a half years so it is pretty cool that I holed that one.”

Spain’s Marta Sanz Barrio recorded her best-ever finish on the LET with second place as she finished just one stroke behind Henseleit on one-under-par.

The Madrid native carded a final round of 69 which included one bogey on the front nine and four birdies in her last nine holes.

“I had a great back nine and couldn’t have dreamt of anything better. I made three birdies in a row from 12 through to 14, I missed a birdie on 11 and my par save on 16 was great,” said Sanz Barrio.

“I don’t regret anything! I congratulate Esther because she saved a great par on 18 to make sure it wasn’t a playoff and hopefully, I will give myself another opportunity to win.

“It is my best finish on the Ladies European Tour and I’m very happy with second place. I came to win and now that I have been even closer, I want to win. I’m very proud, it was the first tournament of the season, and I could not have played better.”

Leader from the first three days, Linnea Ström, finished third on two-over-par with a final round of 77 while German’s Sophie Hausmann was fourth one shot further back.

While four players rounded out of the top-10 as Eswatini’s Nobuhle Dlamini, Sweden’s Johanna Gustavsson, Scotland’s Michele Thomson and Spain’s Luna Sobron Galmes all finished in T8 on six-over-par.