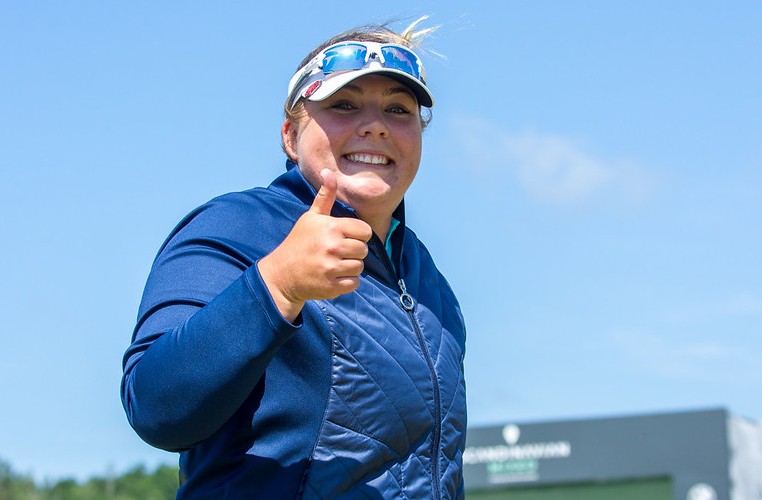 England’s Alice Hewson and Sweden’s Caroline Hedwall both have a share of the lead at the end of the third round of the Scandinavian Mixed.

On a tough day at Vallda Golf and Country Club, which saw gusts of over 35 miles per hour, Wales’ Rhys Enoch and Australia’s Jason Scrivener each fired a round of 66 to claim the clubhouse lead of 12-under-par.

Hewson, who won the 2020 Investec South African Women’s Open on her first professional LET start, recovered from a mixed opening nine holes where she made three bogeys and two birdies.

The 23-year-old rolled in four birdies on the back nine – including three consecutively at the 15th, 16th and 17th holes.

“It was a lot of fun out there! It was really really tough, it has been windy all day and I got off to a bit of a slow start, so I’m really happy,” said the LET winner.

“All week and into tomorrow I have just been trying to focus on every single shot one at a time. That is what we did out there today and it helped in the wind. I think tomorrow I will probably be a bit nervous especially on the first tee. We will try to stay relaxed and just one shot at a time and whatever happens happens.”

Despite an errant tee shot off 18, Hewson produced a good approach onto the green and successfully two-putted to save par and give her a share of the lead.

She added: “On 18, it was not ideal off the tee, so we were really trying to keep it safe, and we weren’t trying to be too aggressive. There was a lot of green to the left and that is where we were trying to hit it and take the two-putt. It was a bit of a longer first putt than I was expecting, but that was okay, we came away with the par and that is what mattered.”

Overnight leader Hedwall also had a mixed start to the morning with two bogeys on her first two holes, she dropped another shot on the sixth but made three birdies to reach the turn level par for the day.

With another two birdies and a bogey on her card, the Solheim Cup stalwart had a two-shot lead coming into the stretch before she found the water at 17 and made a double bogey followed by a par on the last to finish at 12-under-par.

“It was extremely tough,” Hedwall said. “It was almost a shock when I hit the first tee shot how much the end was actually blowing, but I think I adjusted really well and played really good golf. It’s just unfortunate at the end there that I couldn’t get the putts to roll in.

“I actually hit it quite well at 17, I didn’t think it was a bad swing or anything, but it was probably just a gust that caught the ball, and it went in the water – that’s what happens in this type of weather sometimes.

“That is awesome that it is two men and two women at the top. They have obviously set it up really well for us. I’m really looking forward to tomorrow, I think it will be a fun and exciting day.”

Five players are tied for fifth and one shot behind the leaders including England’s James Morrison and Ashley Chesters, Scotland’s David Drysdale, Australia’s Scott Hend and Spaniard Adrian Otaegui – who carded a 66 in the third round.

The three-time LET Access Series winner has recorded rounds of 68, 69 and 70 so far, and is looking forward to the final day.

“I have been enjoying it! I play with guys back home, so it’s not weird to me to be playing with them. I’m going to keep doing what I’m doing. Trying to hit my drives really well, hit it close and sink some putts – keep it simple,” said Nuutinen, who finished T3 at the 2021 Jabra Ladies Open.

A trio of LET players sit on eight-under-par – four shots adrift of the lead – including Germany’s Karolin Lampert and Olivia Cowan and Australia’s Stephanie Kyriacou, as well as Dutch golfer Wil Besseling.