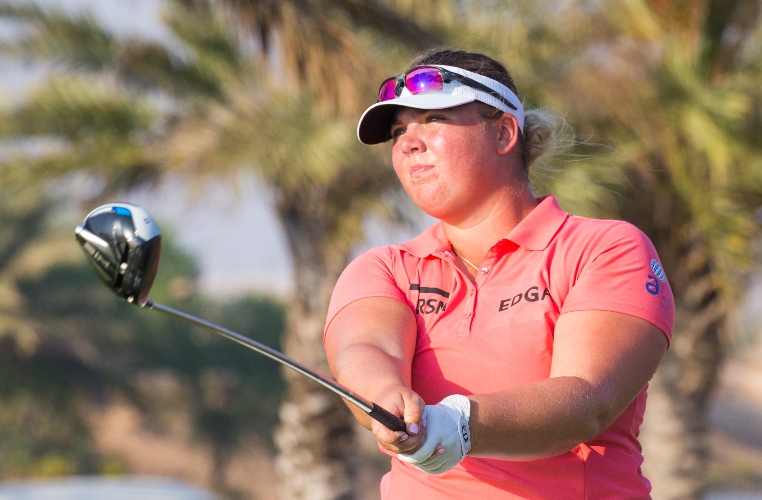 England’s Alice Hewson catapulted herself up the leaderboard at the Aramco Saudi Ladies International presented by Public Investment Fund with a second round 64.

The 2020 Investec South African Women’s Open champion began the day at Royal Greens Golf & Country Club on one-under-par, and kicked off her round with a birdie on the first, despite dropping a shot on the third, Hewson rolled in birdies on six and nine to make the turn in 34 (-2).

But that’s where the English golfer really got into a rhythm; making six further birdies on the back nine to propel herself to the top of the leaderboard on nine-under-par.

“I really enjoyed my day, it didn’t really feel like a 64, I just took every shot as it came. I putted really well today – I think I only had 22 putts – and that really helps on these greens,” said Hewson.

“I didn’t really put too much pressure on myself, I wasn’t driving it the best – I was in the rough a bit more than I might have liked – but I was giving myself some good angles to be aggressive on the pins which was helpful.”

Hewson comes into the Aramco Saudi Ladies International presented by PIF with a T7 finish at the Dubai Moonlight Classic, and after winning in her first LET event as a professional, the 24-year-old knows what it takes to clinch a title.

“I go into every single tournament with the ultimate goal to win – that’s why we play golf – but the next few days I’m going to go out there and enjoy it, go and do what I’ve been doing the first two days and just have fun,” she continued.

“I can only go out there and control what I can control, and that’s my game and my processes, so that’s exactly what I’m going to do.”

There was a delay to the second round because of morning fog with play getting under way one hour and 15 minutes later than planned.

But once it did, Finland’s Sanna Nuutinen was one of the players to put herself in pole position from the morning groups; carding a seven-under 65 to be at eight-under-par for the tournament.

Nuutinen, who is second in the Race to Costa del Sol, produced a bogey-free round with three birdies on the front nine and four on the back nine.

“I just made a lot of putts, I made a few changes to my ball striking a few months ago and I’ve just been getting better and better and getting used to the new ball flight,” said the Finn.

“I haven’t really been hitting it bad though I just haven’t made any putts in a long time, so it was nice to get the putter going again and today it just clicked. I actually practiced my putting a bit more, so I guess that helped!”

A trio of players are two shots off the lead on seven-under-par including six-time LET winner Caroline Hedwall.

The Swede fired a 66 (-6) with a sensational six birdies on the front nine and although, she found the water on 13, two further birdies on 15 and 17 put her in a tie for third place.

“I had a really great front nine, I played really solid golf. It’s not like I made long outs I was just really close, and I made the most of the chances that I had,” said the four-time Solheim Cup player.

“It was unfortunate on 13 to hit it in the water, but I’m proud of myself to get it back to par on the back nine, so overall it was a good day.”

“The front nine today was very good and very steady. I holed a long putt on the fourth hole which gave me a little bit of energy. The wind was a bit stronger than yesterday but that was expected. I had a tough chip on the 18th, but I was lucky I hit the flag stick and had a tap-in for birdie, so that was nice to finish the day off,” said Strom, who has her mum Helena on the bag this week.

“I had a pretty tough year personally so for me it’s nice to be back up there and prove to myself I belong here and I’m very happy with those first two days and I will just try to do the same.”

And the Swedish duo are alongside world number seven Lydia Ko, who recorded a second round of 70 (-2) to be seven-under.

“Overall, I think my long game was much better today, I think I made some careless mistakes on the back nine, but other than that I think I played solid,” said the two-time Major winner.

“I feel like I could have holed a few more putts, but you’ve just got to keep working out there and hopefully my I can get the feels back with my long game over the weekend.

“My iron play has been good; I’ve been setting myself up with good opportunities for birdies – I holed a few more yesterday than I did today but I think continuing to give myself chances is the best I can do and hope that a few more fall.”

The top ten is rounded out by five players and they sit four shots behind leader Hewson on five-under-par including Spain’s Carlota Ciganda.

England’s Hannah Burke and Spain’s Nurria Iturrioz both shot rounds of 68 (-4) to move up the leaderboard alongside the Spaniard, while 2021 Race to Costa del Sol leader Atthaya Thitikul and Australian Whitney Hillier carded rounds of 69 (-3) to be T6 too.

Two groups were unable to complete their second round due to the delay and will finish on Saturday morning after which the cut will be made.