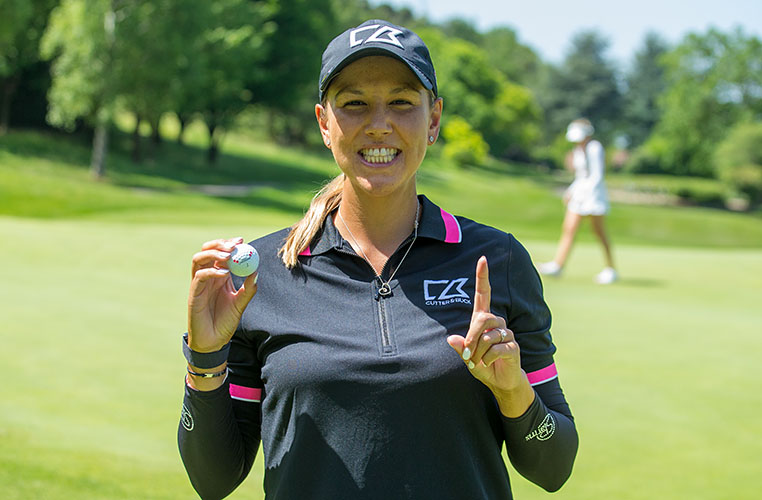 Whitney Hillier from Australia became the third player to make a hole-in-one at the eighth hole in the second round of the Jabra Ladies Open presented by Bitstamp on Friday – and the fourth player to ace the hole in two days!

Hillier used her 8-iron to hole out from 140 yards on a warm and windy afternoon at Evian Resort Golf Club.

Earlier in the morning, Felicity Johnson used her 8-iron to make the first ace of the day and the second of the week on the hole. (Amy Boulden had made a hole in one on the eighth during round one, but later retired with a wrist injury).

An hour later, Aditi Ashok used her 7-iron to get her first hole-in-one in a professional event.

Hillier held on to post a level par round of 71 for a 36-hole total of four-under-par and takes a one-stroke lead into the final round of the tournament, where the winner will earn a place in The Amundi Evian Championship.

A stroke further back in a tie for fourth, Maggie Simmermacher had the round of the day – a five-under-par 66 – to sit alongside Tiia Koivisto and Johanna Gustavsson.

But Hillier was all smiles on the second day.

She said: “I’ve just been laughing all day long with George, my caddie.

“This was my fifth hole in one, so it was pretty special. I saw that two players had already made hole in ones this morning so it was in my head and then it just happened! I hit the shot really well, an 8-iron!

“I’ve had two holes in one this year already, one in Melbourne: crazy! It’s been expensive.

“The most famous one I had was in Sitges in 2018, with Mike Dean as my caddie: that went viral.

“I had a great start today. I was four-under on the turn and then the wind picked up and it was very, very difficult. The other players have had difficulties as well. I just stayed patient more than anything. I birdied my 17th and kept it going. I’m just keen for tomorrow,” she said.

Hillier won the Team element of the Aramco Team Series – Bangkok at the weekend, but is yet to taste an individual victory on the LET.

While former Order of Merit winner Pace has 11 LET titles on her resume, Alonso is also gunning for her first win on Tour.

She said: “The beginning was ok, it wasn’t windy and the sun was out, but the last ten holes were hard with the wind, and on this course it’s really tough.

“On a difficult day like this you just have to put the ball on the fairway and try to hit the greens and then see what is going on.

“The putting was tough today because it was windy when you were on top of the putts and the ball was moving a bit, but I think we are doing a really good job. We were focused on our routines and tried to be as comfortable as possible. It was a good round after the conditions for half of the round, we are happy and I’ll be playing in the final group so we’ll see what happens tomorrow.

“It’s another day; obviously I have a chance to win the tournament, but you have to keep doing your routines and be as comfortable doing them as you can be.”

The third and final round gets under way at 7.45am on Saturday and the tournament winner will earn a place in July’s major championship at the same venue.