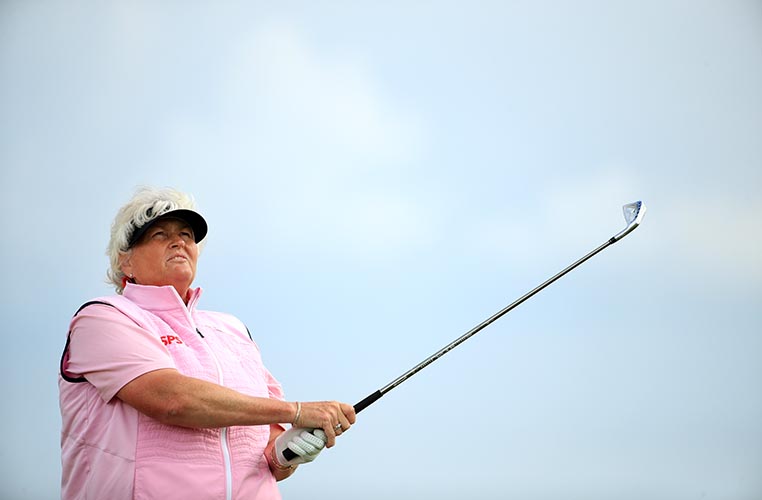 On the eve of the 2020 AIG Women’s Open, the Ladies European Tour’s most prolific winner, Dame Laura Davies, prepares for her 40th appearance at the prestigious championship at Royal Troon and has the honour of striking the first tee shot at 6.30am alongside Northern Irish amateur Olivia Mehaffey and Canadian Alena Sharp.

The 45-time LET winner, who also has 42 ‘other’ worldwide victories including 20 on the LPGA Tour and four major championships, truly has an unrivalled CV with victories around the world in countries including; UK, U.S, Belgium, Italy, France, Spain, Switzerland, Germany, Australia, New Zealand, India, Japan and Thailand but no victory would be sweeter than her home open in the ‘Home of Golf’.

Davies may not have played a professional event here at the Ayrshire Links but has history on the famous ‘Postage Stamp’ 8th hole.

“It’s a terrifying hole. I played the British Amateur here in the late seventies and I hit 6-iron, 6-iron in to the postage stamp. I blocked my 6 iron with the wind howling from left to right, in to the 7th fairway, and hit another 6-iron from there in to the bunker before ending up with a double or a triple.”

Hoping for better fortunes this week, The Dame, who first teed it up in the Women’s Open in 1980 as a 16-year-old amateur and triumphed at Royal Birkdale in 1986, said,

“If you’d have said back in Wentworth, you’ll play 40 of these and never miss one, I’d say don’t be ridiculous. I had to qualify a couple of years ago at Kingsbarns but because of the past champion rule, I’ve managed to have an amazing run and I’ve been able to play this great event so many times.”

It is hard to imagine anyone else achieving such a remarkable record and Davies, who has amassed nine top-10 finishes in this event was quick to agree.

“I don’t think anyone else is stupid enough to do 40 years of this”.

Off in the first three-ball of the day and hoping to get around in double-quick time to avoid the forecasted wet and windy weather, Davies, who was questioned on whether she was a morning person said,

“I think I’m going to have to be. They rang me and said would you be interested in hitting the first shot, and I thought yes I will, we’ll get around quicker if anything. I’ll be a bit nervous but we are lucky we are playing and everyone’s done so much hard work to get us here.”

One thing that is clear, whatever the weather Laura Davies will go down in AIG Women’s Open history and it is clear her peers think so too.

Danielle Kang said, “In my opinion, it’s remarkable because Dame Laura Davies is a legend, an absolute legend, and she’s a role model how she approaches the game, how she plays the game is different, her style of golf is different, and she’s so strong in how she plays and plays her game, yet so different and it’s so graceful. For her to be able to play this Open Championship for 40 appearances, that is amazing.

The 2018 champion Georgia Hall, said, “She’s a great friend and person and idol to look up to. I actually texted her last night saying, oh, look at you hitting the first tee shot; don’t hold us up. She’s great fun and obviously she still loves playing the game. It’s amazing. I kind of pulled up to the car park and I have my 2018 champion space and I look down and it’s Laura in her 1986 spot and I had a joke with her that I was born ten years later than that, and she found that funny. She’s a really lovely person, and I love being on Tour with her”.

Follow Laura Davies and the rest of the all-star 144-player field on the LET website and via social channels @LETgolf and @Ladies European Tour on Facebook. #AIGWO @AIGWomensOpen