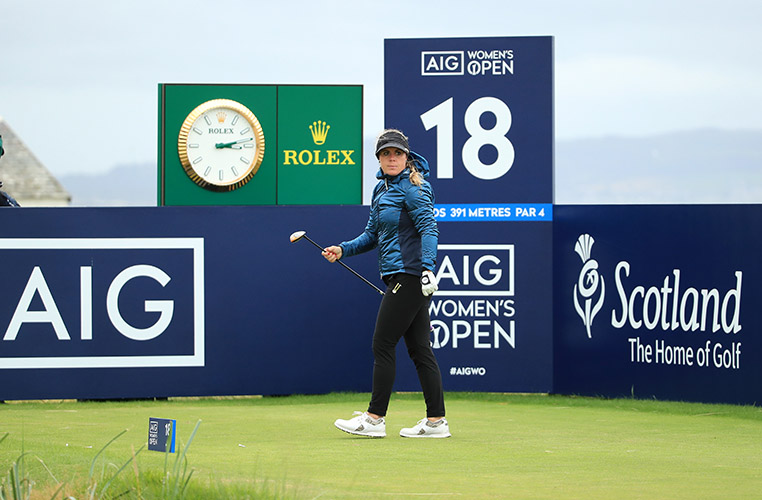 Sweden’s Daniela Holmqvist holds a slender one-shot lead heading into the weekend at the AIG Women’s Open after a second round of 70 (-1) puts her atop a tightly packed international leaderboard.

As the only player to finish under-par after 36 holes, Holmqvist was one of only seven players to break par on a day where Royal Troon again showed why it is such a feared and respected Open venue with the halfway cut coming at nine-over-par – the joint-highest in tournament history.

Much talked about this week is the weather, with strong winds again playing a pivotal role in scoring for the duration of the day with the early starters also enduring heavy rain.

A slight change in wind direction proved to be the difference, switching from the south to south westerly compared to yesterday, to ensure a slightly different challenge throughout with average wind speeds between 25-35mph.

Holmqvist said, “Conditions were really tough. I felt like it was brutal out there but happy to get in under par. We had a lot of crosswinds and the front nine played pretty long and yeah just happy to be in.”

In only her second AIG Women’s Open appearance, having previously played in 2013, the Stockholm native is looking to emulate another Swede who achieved success here in 2016.

“I remember watching the last 18 holes with Phil and Henrik playing, and I think that was probably one of the best showdowns I’ve ever seen in major championship golf.”

A truly international field, the top ten is represented by as many as eight nationalities with American Austin Ernst in T2 alongside Germany’s Sophia Popov at level-par.

After a near miss at the Aberdeen Standard Investments Ladies Scottish Open last week, Pedersen, who is a former Solheim Cup player, has been turning heads again with her impressive displays on the links, highlighted today with a birdie on the famous ‘Postage Stamp’ 8th hole.

“I hit it probably 20 feet past and then it spun back a yard or two and then holed the putt. So that was good. It was important to get the momentum back.”

Another birdie at the 9th meant the Dane briefly got to red numbers, only for a double-bogey on the par three 14th hole to temporarily halt her progress.

All week at Royal Troon one of the main story lines has been the role of the caddie, on and off the course, and with the heavy rain and winds of up to 35mph common place, Pedersen was quick to compliment her bagman.

“The caddie is always important, but on a day like this, it’s just nice that all my focus can be on staying dry and trying to get ready for the shot. We did a good job today and I was really happy about that.”

Overnight leader Amy Olson saw her hopes of leading heading into the weekend dashed with a  second round of 81 (+10) while Scotland’s Catriona Matthew struggled on the back nine, eventually signing for a round of 76 (+5) to sit in T21 just six shots off the pace.

The 2019 Solheim Cup Team Europe Captain, said, “It was a lot tougher out there actually, a lot tougher today. It was just a crosswind today, so downwind played as tough coming as going out, actually.”

Notable players to miss the cut include Solheim Cup stars Celine Boutier, Lexi Thompson, Charley Hull and Caroline Hedwall, major winners Brooke Henderson and Stacy Lewis as well as Dame Laura Davies, who made her 40th appearance in the championship.

Check out all the tee times HERE