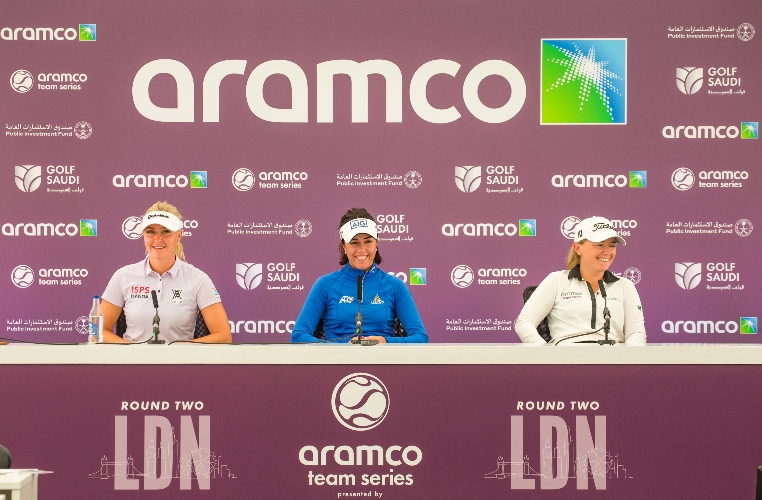 Centurion Club plays host to the second edition of the tournament, which has a format of a 54-hole Individual event alongside a 36-hole Team event.

In October last year, Hull clinched the Individual crown at the Aramco Team Series – New York and has already teed it up this year playing in Bangkok.

The three-time LET winner picked compatriot Annabel Dimmock in her team, and they will be joined by Norway’s Karoline Lund.

“It’s a lot of fun,” said Hull “It’s quite a relaxing format and you get to pick your friends as well. I enjoy it a lot and I love playing golf in England.

“You have your team around you and it’s a little more relaxed. I’m more of an individual player and always have been, but it is fun to have team golf.”

Hall, who won the Aramco Saudi Ladies International back in March, appreciates the change of scene that the format brings.

And having already notched up a victory in 2022, the Major winner is hoping she can carry her form through her busy summer stretch starting in London.

“Coming so close a couple of years ago, it was quite important to me that I tried my best to win a few months ago,” said Hall, who is playing alongside Lily May Humphreys and Marta Martin.

“Winning by five shots is very special and I managed to keep it together the last few holes and lift that trophy. My season so far has been pretty good.

“I have been very consistent. Obviously, a win and some high finishes. I’m really looking forward to the very busy run we have now and always nice to play in England.”

While Law, who is joined in her team by Catriona Matthew and Moa Folke, heralded the recent win of Linn Grant at the Volvo Car Scandinavian Mixed and is looking forward to being a team captain once again.

“It’s absolutely fantastic,” said Law. “I think that maybe people stop using the argument that people aren’t as outstanding as the men given that she beat them by nine shots. I think it’s a great thing for the game and I hope that she gets that acknowledgment.

“Being a team captain, it encourages you to balance out your team well. Usually are only concerned with yourself on the golf course but now you’ve got three other people that you want to keep motivated.

“A head might go down at times and it’s your job to pick a head up when they are not feeling so good about themselves. That would be one thing in particular that gets added to your skill set which you probably wouldn’t have had before. I think it’s a fun aspect to the Tour.”

Defending champions from last year Marianne Skarpnord (Individual), as well as Olivia Cowan, Sarina Schmidt and Diksha Dagar will all tee it up this week.

Solheim Cup star Nanna Koerstz Madsen, who is number 23 in the Rolex Women’s World Golf Rankings, will be making her debut in the event with Belgium’s Manon De Roey and Slovenia’s Pia Babnik, who won the individual crowns in Bangkok and Jeddah respectively, also back for more glory.

Seven of the top 10 in the 2022 Race to Costa del Sol will be vying to add more points to their year’s tally, while LET winners from 2021 include England’s Bronte Law and French duo Lucie Malchirand and Pauline Roussin Bouchard.