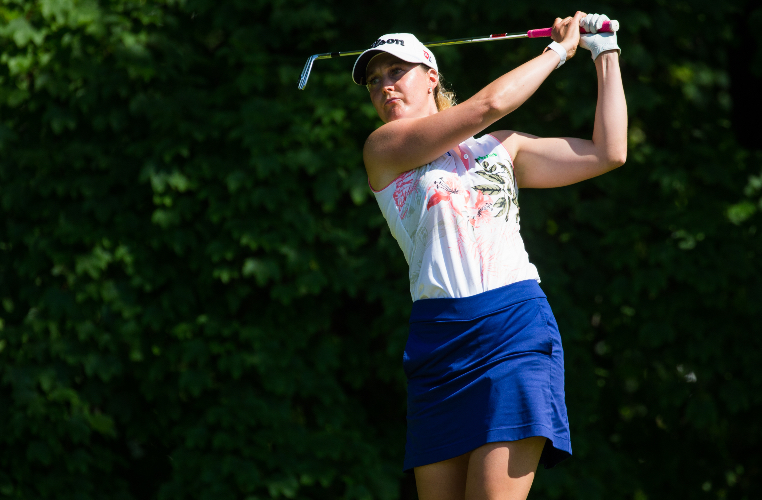 This week Evian Resort Golf Club hosts The Amundi Evian Championship – the first European Major of 2021 – which will see many Ladies European Tour (LET) stars teeing it up.

There are 126 players in the field competing for a purse of $4.5 million USD in a 72-hole tournament with a cut after two rounds.

One LET player, who is competing for the first time at The Amundi Evian Championship is Finland’s Sanna Nuutinen who sits currently on the second spot in the 2021 Race to Costa del Sol.

The Finnish star gained some Major experience at last year’s AIG Women’s Open but sees a big difference at Evian.

“It is a bit different because of the type of the golf course, this is the opposite of a links course. It is good to see all the best players in the world and to be in the same line with them,” she said.

The 30-year-old sits second in the LET Solheim Cup points standings and has a busy summer ahead with Tokyo on the horizon.

Nuutinen had a trial run for the pressure faced at Evian in last week’s Gant Ladies Open, which was played in her homeland with all eyes on her and her fellow Finnish players.

“There was a bit of extra pressure on me with having all the media and home crowd attention,” she explained. “But we have to get used to it, the best players in the world go through this every day. It is nice to have better and bigger facilities, but what puts the pressure on the most is that there are the best golfers in the world competing with you. There is no room for errors if you want to win.

“I’m much more comfortable having played three times in the Jabra Ladies Open at this golf course. It is still a Major championship set up, so it is a few shots tougher, but it definitely helps.”

The 2020 Race to Costa del Sol champion Emily Kristine Pedersen is excited to be competing in her fourth Major of the 2021 season.

The Dane has had a long stretch of events since the season started for her in March on the LPGA Tour and was thankful to be able to go home last week.

She said: “I love competing against the best players in the world, it is what I like the most about golf. I mostly try to learn patience and dealing with troubles on the golf course. Majors are always a tough challenge, and everyone is going to face it. It is not about whether you get into trouble, but how you handle the situation.

“I spent last week at home, which was much needed, I feel like I pushed it a little bit in the past few months. I had three intense days of practice with my coach and then three days at home when I practiced a bit but also rested.”

England’s Alice Hewson, who recorded her third top-10 of the season at last week’s Gant Ladies Open, is looking forward to teeing it up this week.

It will be the 23-year-old’s first time competing at The Amundi Evian Championship, but Hewson is savouring the challenge ahead.

“It feels amazing to compete with the best players in the world. It is an opportunity I have not had too many times as this is my second Major. To compare myself to some of the LPGA girls in the best place in the world is an opportunity I am really looking forward to. I know it is playing a bit difficult out there so I will just play one shot at a time. I think hitting a lot of fairways is going to be key this week.”

Olivia Cowan is also getting a taste of The Amundi Evian Championship for the first time this week, having competed at the Women’s Open many times before.

At the start of June, Cowan finished T3 at the Jabra Ladies Open and she is hoping for another good week in Evian.

Cowan said: “This is definitely different to when we played the Jabra Ladies Open, there is a lot more people and stands here, but it is really cool. It will be more difficult; the course plays longer and the rough is thicker, so I am just trying to stay on the fairway.”

“My main goal is to enjoy it this week, I think that is the most important thing. Hopefully, if I have a good week, I could get some more Solheim Cup points. It is pretty cool seeing all the best players here, but it is great to see some of my friends from the States that I hardly ever see, I get to see them at these events, so it is nice to be around them.”