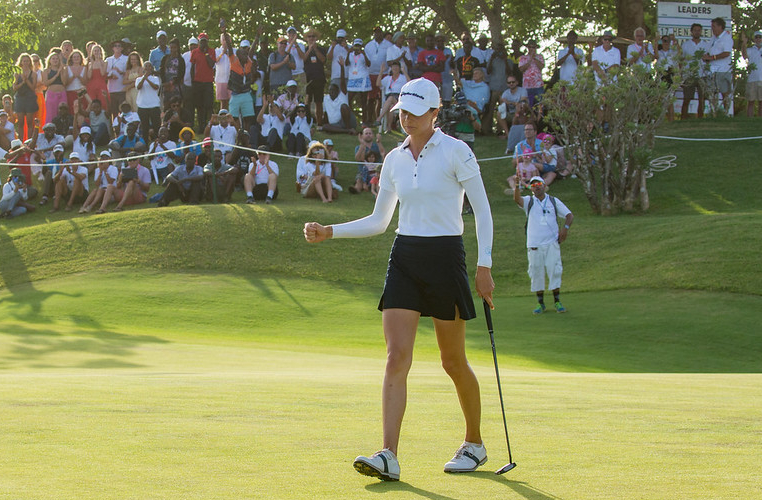 Esther Henseleit returned to Vipingo Ridge as defending champion. It was new and something the German hadn’t experience before.

Her photo was featured all over the clubhouse and everyone knew who she was, but apart from that nothing was that different according to the 2019 champion.

The Baobab Course was a tougher challenge this year with the wind getting up and the players adjusting to the hot and humid conditions.

Sweden’s Linnea Ström led after round one when she carded a 68 (-4) with France’s Emma Grechi in second place and Wales’ Amy Boulden in third.

Day two saw four players go under par and Scotland’s Michele Thomson produced the round of the day carding a bogey-free 66 (-6).

Ström stayed at the top of the leaderboard after posting a 73 (+1) while Spain’s Nurria Iturrioz was in second with four players including Thomson in third place.

Heading into the weekend with Saturday as the traditional ‘moving day’, the defending champion climbed up the leaderboard after firing a 69 (-3).

The German sat in third place alongside compatriot Sophie Hausmann on level par with Ström still out in front and Spain’s Luna Sobron in second.

Back in 2019 Henseleit fired a final day 64 (-8) to win the competition but it wasn’t so simple this time out.

After a bogey on the first, the 23-year-old found her form with four birdies on the front nine to see her in a tie with Ström at the top of the standings.

Another birdie on the 11th put Henseleit in pole position but it wasn’t all plain sailing coming down the stretch.

A bogey on the 13th saw her lead reduce and then the German found the water on 17, where she made an excellent up-and-down to come away with a bogey.

Heading down the last the 2019 LET Order of Merit winner knew she had to make a par as she had a one-shot lead over Spain’s Marta Sanz Barrio, who was already in the clubhouse.

Henseleit’s shot into the green went long and she left herself a lot to do to come away with the par, but the German duly delivered successfully defending her Magical Kenya Ladies Open title.