England’s Lily May Humphreys took a huge step towards qualifying for the PING Junior Solheim Cup by winning the ANNIKA Invitational Europe on Thursday by one shot.

Humphreys had rounds of 69-68-70 at Vasatorps Golf Club in Sweden to finish on 12 under par and jump from 19th place in the rankings to sixth. The top six players automatically qualify for Mickey Walker’s European team at the conclusion of the 10th and final counting event in mid-August, with a further six players earning wildcard picks.

Slovenian Pia Babnik consolidated second spot in the rankings by finishing third in Sweden, and Italian Benedetta Moresco took fifth place to move up two spots from fifth to third.

Scottish hopeful Hannah Darling boosted her chances of making the team by finishing tied sixth alongside two others – Paula Kirner and Amalie Leth-Nissen – to move up from 18th to 15th in the rankings.

The PING Junior Solheim Cup, like its senior version, pits Team Europe against Team USA and this year takes place at Gleneagles, Scotland (King’s course) on 10th and 11th September. The Solheim Cup kicks off on the PGA Centenary course at Gleneagles on Friday 13th September.

Click here for more information about the PING Junior Solheim Cup and The Solheim Cup, www.solheimcup2019.com 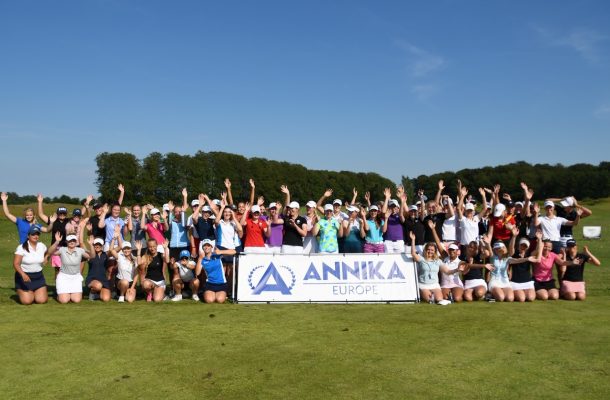 Participants with Annika at the ANNIKA Invitational Europe