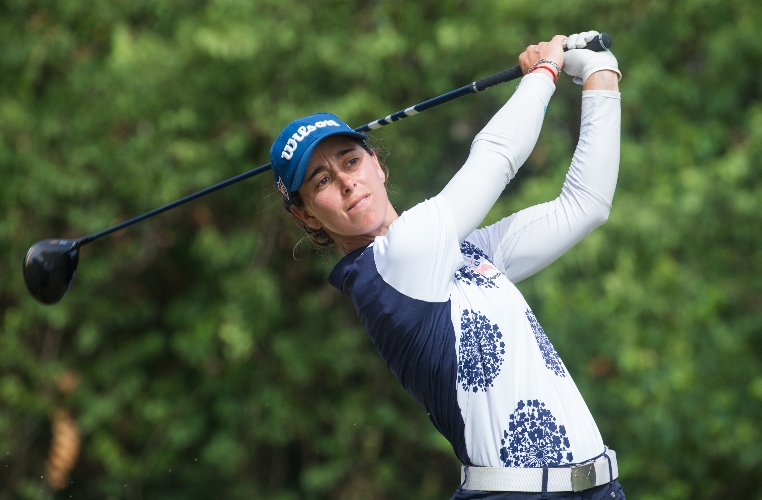 There’s nothing quite like playing a tournament in your own country, and Nuria Iturrioz is looking to make the most of home advantage at this week’s Madrid Ladies Open.

The Spaniard will be looking to earn herself a fourth LET tournament success at Jarama-RACE Golf Club, having last tasted victory at the Omega Dubai Moonlight Classic in 2019, and is already looking towards the summer of 2023 for inspiration.

With the Solheim Cup coming to Spain for the first time in a little over 12 months’ time, -where it will be staged at the scenic Finca Cortesin Golf Resort – there is no bigger incentive for Iturrioz to perform in the coming year, with the opportunity to represent Team Europe already at the forefront of her mind.

“Since I was little I have always dreamed about playing in the Solheim Cup one day. The Solheim Cup is the pinnacle of the women’s game and every player from the United States and Europe aspires to make the team each time,” Iturrioz said.

“Next year’s event at Finca Cortesin is going to be even more special as it is being hosted in Spain. I have previously played with the National Team in Spain so I have an idea of what it feels like to play in these kind of competitions, although the Solheim Cup will be another step up in terms of my career if I get picked.

“Having the event in Spain also means it is going to be a beautiful week, and even more so at Finca Cortesin, as I know they will treat the tournament and the players with a lot of care and respect. It is my ambition to be there, and this goal provides me with all the extra motivation I need heading into the start of this season.

“I will of course try my best over the next 18 months to qualify for the European Solheim Cup Team automatically. By competing on the best courses, I want to try and achieve enough good results to hopefully earn my spot in the team through this path.”

Spain has always been well represented when Europe and the USA do battle over the years, with seven different players being picked to represent the continent on the biggest stage in women’s golf.

With her recent partnership with the upcoming Solheim Cup venue, Iturrioz is looking to not only build on her own game to become one of the names in contention when Team Europe captain Suzann Pettersen announces her team next year, but also to inspire the next generation of talent coming through.

“I would like to say thank you to Finca Cortesin for taking this opportunity to sponsor me as a player and providing me with the facilities to progress my career. It is a huge honour for me to have the backing of such an amazing resort,” she continued.

“We are both moving in the same direction and have a similar love and passion for the game of golf. This makes me feel safe and of course privileged to have them on my team moving forward. I can’t wait to visit the resort again in the near future and be able to use their amazing facilities to practice whilst in Spain.

“The game of golf for women has grown massively since I was a child and even more so during my career as a professional over the last few years. The opportunities that are now available for female golfers is now incredible and I hope it continues to progress on an upward journey over the next few decades.

“There is already a growth in the number of female amateur players starting to get involved in the game. I often see more and more women of all ages taking up the sport in Spain since news of Finca Cortesin hosting the Solheim Cup was first announced.

“Hopefully the actual event next year will inspire even more people to get involved in the sport of golf. The only thing they need to remember is to pick up a club and try it. Once new players make it past the first step of going to a golf course for the first time and trying to play, they soon realise how good the sport can be for one’s health and well-being, as well as how fun it can be too!”