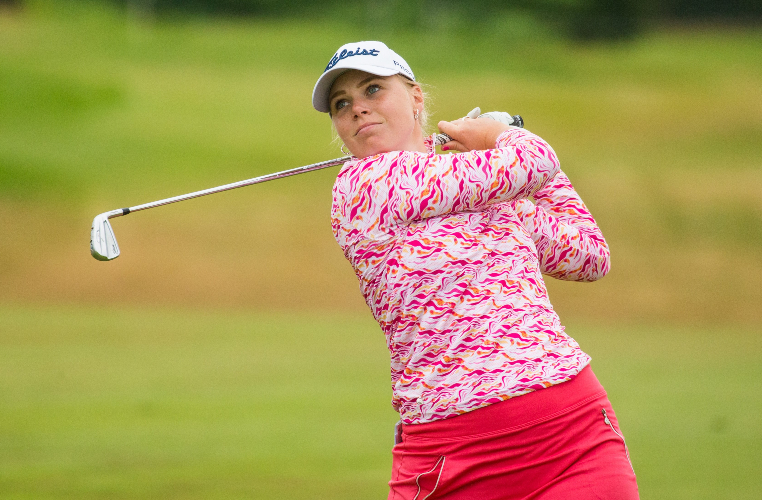 The 29-year-old completed her round on Saturday morning due to a three-hour delay on Friday due to severe weather.

Karlsson began Friday with a three-shot lead at Golf & Country Club Seddiner See after a bogey-free first day and made an excellent start with four bridies and two bogeys on her front nine.

The Swede dropped a shot on the 10th but soon made back-to-back birdies on 12 and 13 and rolled in another birdie on Saturday morning to reach a total of 13-under-par.

“Yesterday I was a bit tired, it was a long day. I played well, and made some birdies and bogeys, we had better weather today and it was a nice morning to get out and play,” said Karlsson.

“It is so much fun with Pontus and he is really helping me out this week. The conditions are nice, I wasn’t sure because of the rain yesterday but it’s better than I thought it would be.”

England’s Hayley Davis sits in second place on nine-under-par having carded a second round of 67 (-5) which included six birdies and one bogey.

“It was a late start yesterday, I played well and managed to get 13 holes done before finishing this morning,” said Davis.

“It was good this morning, I hit some good shots and made three birdies in five holes. I have been working quite hard and I got a new putting coach a few months ago, so I’ve been concentrating on that and simple swing thoughts trying to be steady and consistent.”

Swedish duo Linn Grant and Maja Stark, who sit first and second in the 2022 Race to Costa del Sol, are in a share of third place on eight-under-par having both signed for rounds of 68 (-4).

“It was nice to go out in the morning with it being early and there was no wind, it was pretty soft. You could actually hit it at the pin,” said three-time LET winner Grant.

Stark added: “It was nice to play and be alongside Linn these past two days. It was good, the greens were rolling really good, and it wasn’t that wet at all.”

Another Swede is one shot further back with Linda Wessberg producing a bogey-free second round of 67 (-5) to be T5 alongside Germany’s Leonie Harm.

Wessberg explained: “It was a quick turnaround between last night and this morning, but the weather today was lovely.

“I like the layout and it reminds me a little of the course that I have at home – though that is hillier – but I think the type of grass and the greens are a bit tricky to read, and I have that at home. It is something that I should be used to, but you never know.”

“It was eventful! Even though it’s not super comfortable to have a tee time after 5pm but the weather was okay,” said Harm.

“Yesterday it played very different and way longer, it was an adjustment, but I started well. I had three three-putts; every round you end with a birdie it always gives you a little bit of momentum so that’s what I’m hanging on for.”

Three players are in a tie for seventh place with Germany’s Polly Mack and English duo Gabriella Cowley and Alice Hewson on six-under-par.

Two-time LET winner Esther Henseleit is T10 alongside compatriot Olivia Cowan, Norway’s Marianne Skarpnord and Spain’s Carmen Alonso with the quartet having a total of five-under-par after 36 holes.

The cut fell at +2 with 67 players making it to the final two days of the Amundi German Masters.