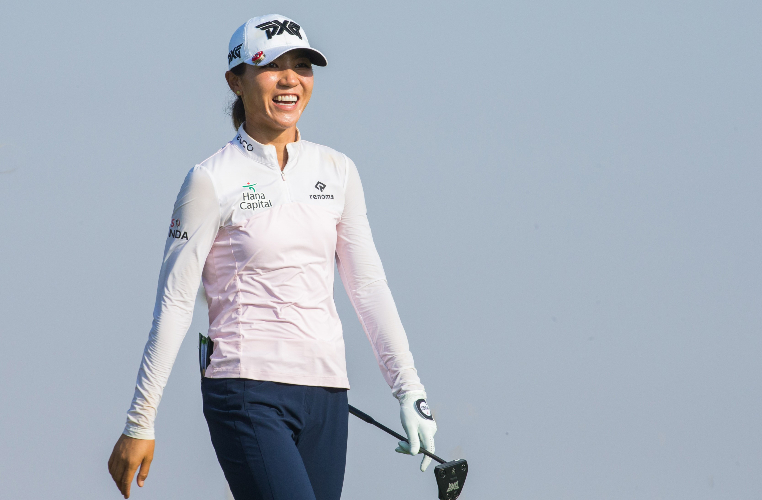 World number seven Lydia Ko produced a scorching round of 63 to claim a four-shot lead on day three of the Aramco Saudi Ladies International presented by Public Investment Fund.

The New Zealander put on a show at Royal Greens Golf & Country Club to equal the course record and move to 16-under-par for the tournament.

Ko dropped a shot on the third hole but that lit a fire for the two-time Major winner, who then made three consecutive birdies on holes four through six.

The 24-year-old continued that trend with three birdies in a row around the turn, before rolling in three more on 13, 14 and 15 with her final birdie coming on the 17th to seal a sensational round.

“I played really solid today, I missed a short putt for par on three, and then I got really angry and went on a stretch of birdies,” said Ko.

“I gave myself a lot of good looks for birdie opportunities and was rolling it well, so it was a great combination of everything, and I didn’t make a lot of mistakes, it was a sort of round where I kept putting myself into positron and play the best golf I can.

“I hit one nasty drive, but I was able to come off there with a par. That’s what you’ve got to do – sometimes you’re not going to hit good shots, so you’ve got to grind your way and hopefully make par.

“I’ve just got to keep playing aggressively, this is a course where players are playing well, so I’m just trying to make my share out there and see what happens.”

Four shots behind Ko is 2021 Race to Costa del Sol leader Atthaya Thitikul, who carded her best round of the week so far with a 65 (-7).

The Thai teenager started her day well with birdies on the first and third along with an eagle on the fourth before rolling in another birdie on the ninth.

Thitikul’s next birdie came on 13 and despite dropping a shot on the 14th, she bounced back with consecutive birdies on 15 and 16 to be 12-under-par for the tournament.

“I felt pretty good about my round today, my putter was on fire. My first shot wasn’t the best, but it was pretty good all day, I’ll take it,” said the four-time LET winner.

“Lydia Ko played pretty solid, she hits a pretty good shot and her putting and short game is one of the best, we’ll learn from her for tomorrow. I’m just going to try rolling my putts and making birdies to stay focused for tomorrow.”

The 18-year-old has a chance to seal the Race to Costa del Sol crown this week as she has a 1,446.69-point lead over Finland’s Sanna Nuutinen.

She added: “It would be an honour to win the trophy and it would mean a lot to win the Race to Costa del Sol.”

Overnight leader Alice Hewson had a difficult start to her third day at the Aramco Saudi Ladies International presented by PIF.

The 2020 Investec SA Women’s Open champion carded three bogeys in her opening six holes but fought back well rolling in birdies on eight, nine and ten.

Another bogey on 11 didn’t deter the Englishwoman as she made two further birdies on 12 and 14 for a round of 71 (-1) to be six shots behind the leader and in third place.

“I definitely got off to a bit of a rough start, I wasn’t swinging it my best and I had three full horseshoe lip outs,” said Hewson.

“It was a little bit of a shakey start but I did a really good job and I’m really proud of how I settled myself down and to come back and shoot one-under after being three-over – pretty proud of that effort.

“Tomorrow is going to be a great experience for me. To see what I can learn from Atthaya and Lydia, I’m very much looking forward to it.”

Spanish duo Nuria Iturrioz and Carlota Ciganda both recorded rounds of 68 (-4) to move to nine-under-par to be tied for fourth place.

“I made two bogeys that cost me a lot, but tomorrow I have 18 more holes to play, and I hope I can enjoy it. I really like it here. Tomorrow is the same game plan – to go for it,” said Iturrioz.

A trio of players are tied for sixth place including American Alison Lee who has had a remarkable second and third rounds.

After beginning the tournament with a 77, the Aramco Team Series – Sotogrande individual champion has posted rounds of 65 (-7) and 67 (-5) to catapult herself up the leaderboard.

Lee sits on seven-under par alongside Australia’s Whitney Hillier and Finland’s Nuutinen, who carded rounds of 70 and 73, respectively.

Rounding out the top ten is India’s Tvesa Malik, England’s Georgia Hall and Germany’s Olivia Cowan, who are all ten shots back from Ko in T9.