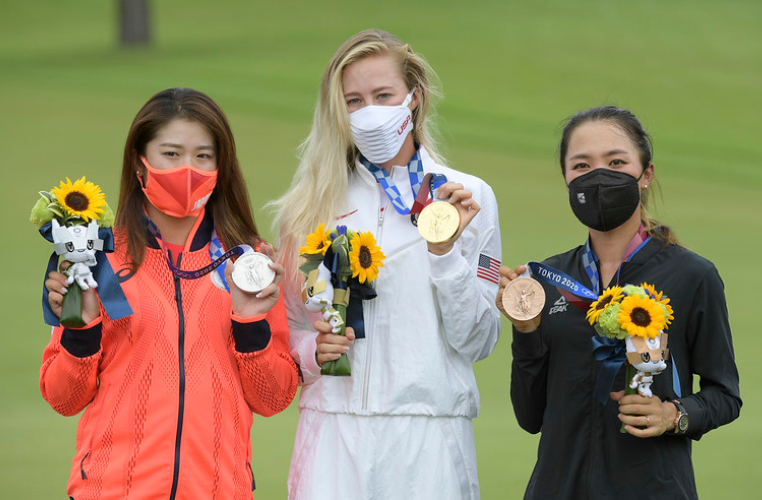 Nelly Korda shot a final round of 69 (-2) to secure gold in Tokyo and win the USA’s first women’s title in Olympic golf since 1900.

Korda, who is number one in the Rolex Women’s World Golf Rankings, began her round with a birdie on the second and made a double bogey on the seventh.

But the American bounced back with three consecutive birdies on eight, nine and 10, she bogeyed 11 and then added another birdie on 13 to triumph by one stroke in the Olympic Women’s Golf competition.

“It feels amazing! It was very stressful, but I kept it together and fought pretty hard. I have had a pretty good stretch of events, but it doesn’t necessarily mean that you’re going to play well,” said Korda, who finished on 17-under-par.

“You try to put the expectations to the side and just go out and have a nice fresh week, enjoy the Olympic experience because it is such a unique and fun experience now doing it for the first time. You play for more than just yourself; you also play for your country. So safe to say I really enjoyed my first Olympic experience.”

There was a rain delay as the leaders entered the final stretch, but Major winner Korda kept relaxed by talking to her sister Jessica.

She added: “Obviously I was nervous, but during the rain delay I was just with my sister, we were relaxing, kind of chit chatting on the ground, in the clubhouse and I think that really helped a lot just to kind of not think about it and just to kind of take a step away in a sense during that rain delay and have some fun.”

In the battle for the remaining medals, New Zealand’s Lydia Ko – the silver medallist from Rio – and Japan’s Mone Inami finished tied for second on 16-under-par.

The duo headed back down to 18 at Kasumigaseki Country Club to decide who would clinch the silver medal and who would take home the bronze.

It was home player Inami, who made a par on the playoff hole, to claim silver while Ko became the first golfer to win multiple Olympic medals by securing bronze.

“I’m so happy. I thought that it would be really impressive to participate in Olympics. I never thought I would play in Olympic games with golf,” said Inami.

“For me I don’t feel this is real, I still kind of can’t believe this Games was held in Japan and Japanese player won a medal. So, for the future of the golf players for the younger generations who wish to play the golf I hope such a generation of younger golfers will come out.”

Ko explained: “I’m very honoured and privileged to be able to bring a medal and for New Zealand. We just broke our last record, which in 2016 I think that was the most medal count we had within New Zealand and then a couple days ago we just broke it and then for me to be able to add to that is obviously a huge honour. Yes, I wish I could have brought a different colour medal, but overall, just to bring the medal for New Zealand I hope everyone back home is proud, and I felt so much love and support for them, so this is for New Zealand.”

India’s Aditi Ashok, who had a phenomenal tournament, just fell short on the final day finishing in fourth place on 15-under-par.