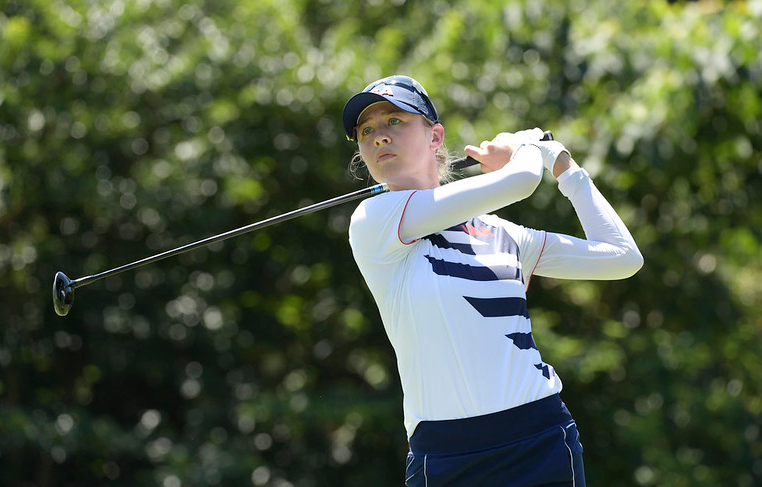 World number one Nelly Korda fired a sensational round of 62 to have a four-shot lead after the second day of the Olympic Women’s Golf competition.

The American opened her round with fours pars, before rolling in four birdies and an eagle on her next five holes to make the turn in 30.

Korda continued her momentum on the back nine with three consecutive birdies on 12, 13 and 14 before adding to further birdies on 16 and 17.

The USA star needed a birdie on 18 to record a round of 59, but ultimately fell short making a double bogey to card a round of 62 and put her on 13-under-par for the tournament.

“On the front nine I was definitely hitting it better and, on the back, I wasn’t hitting it as well, but I was making the longer putts. I wasn’t thinking about it at all I was like ‘oh cool, I have a pretty good lead going into 18’ but unfortunately that double on 18 – that’s golf and that’s just how it goes sometimes,” she explained.

“I’m wearing USA across my chest, I think that’s really coo and a huge honour, but other than that I’m approaching it as I would any week. I go into any type of event with the same demeanor and same goal.”

Madsen produced a round of 64 (-7) to move up the leaderboard with six birdies, one eagle and one bogey on her card.

“I had a good run on the front nine where I made three birdies and an eagle in a row, so I got six-under through eight. I was playing pretty good. Then on the back nine I was still playing alright, I had some good chances I didn’t make but I was still happy with the back nine,” said Madsen, who sits third in the European Solheim Cup points standings.

2020 Race to Costa del Sol champion Pedersen had an excellent round of 63 (-8) to move herself into contention.

Pedersen said: “I was wedging it really well today, which gave me a lot of chances for birdie. Then I had a really hot putter today and that’s kind of what made the score. It’s amazing that two Danes are at the top. I think it’s a really good showcase of golf for Denmark and for women’s gold in Denmark. I’m super happy that we’re both up there.”

After posting a round of 67(-4) yesterday, India’s Ashok followed that up with a round of 66 (-5) to move onto nine-under-par for the tournament alongside Madsen and Pedersen.

The three-time LET winner went bogey-free in her second round with birdies on the second, sixth, 15th, 16th and 17th.

“The last three holes I had a couple of shots that were just a good number for me, and I hasn’t really had any short approaches all day, maybe just a couple. I hit a couple of good putts as well,” said Ashok.

“This whole week there’s going to be so many girls making birdies, especially because the weather’s warm and the conditions are favourable. I think whatever holes I get to play, whether it’s 54 or 72, I’m not really going to sit on anything, I’m just going to try and be as aggressive and make more birdies.”

A highlight of the day was Morocco’s Maha Haddioui hitting the perfect shot and making an ace on the par-3 seventh.

Australia’s Hannah Green is in eighth place on six-under-par, while China’s Xiyu Lin and New Zealand’s Lydia Ko are T9.

The competition continues tomorrow, though there is the possibility the format will be shortened to 54-holes due to severe weather over the weekend.