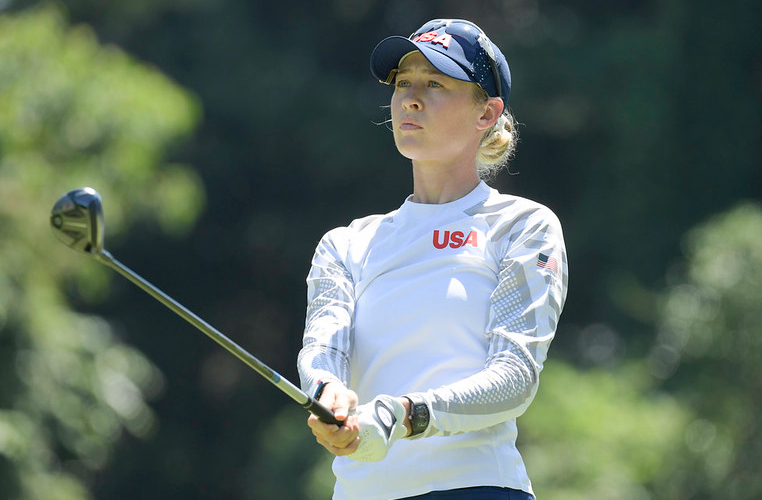 American Nelly Korda’s form at the Tokyo Olympics continued as she fired a round of 69 (-2) to lead by three strokes after 54 holes.

The number one in the Rolex Women’s World Golf Rankings battled hard on the third day of the Olympic Women’s Golf competition.

Korda rolled in three birdies on the second, fifth and sixth holes before dropping a shot on the eighth and finished her round with 10 pars to be on 15-under-par for the tournament.

“I didn’t have a really good back nine, I was kind of spraying it all over the place, I had some testy par putts, but made all pars and I fought really hard to stay in it really or ahead of it,” said the 2021 KPMG Women’s PGA Championship champion.

“I’ve been actually really calm the last three days. I haven’t really gotten nervous. I think I was a little nervous obviously on 18, it’s not a really easy chip from back over the green, but other than that I’ve handled myself really well this week, I’ve tried to stay as present as possible. I’m really working on that this year, just to take it shot by shot and stay present and not to look too far ahead or kind of go back on I think about mistakes that I’ve made in the past.”

India’s Aditi Ashok has put herself in an excellent position to medal heading into the final day of the competition.

The three-time LET winner carded a round of 68 (-3) which included five birdies and two bogeys to put her on 12-under-par and three shots behind Korda.

Ashok said: “I think it was good. I think I didn’t really have my best, especially on the long holes with the long approaches I wasn’t as consistent. It was a good day and not making as many bogeys as I could have been. My putting wasn’t as good today as the first two days, so making those couple par putts that were like the one on 12 and the one on 18, those helped because I knew my putting wasn’t that good today compared to the first two.”

Four players are tied for third place with one round remaining including Rio silver medallist Lydia Ko, who fired a round of 66 (-5) to move to 10-under-par.

“I’m trying to do my best on every shot anyway, but it’ a weird situation now because we don’t know if we’re going to get a chance to better our score or better our placement, but I’m just happy that I stuck in there today,” said Denmark’s Pedersen.

There is the potential for severe weather tomorrow with the players hoping to be able to complete their final rounds. The leaders are due to tee off at 08.18 local time.

Keep up to date with the leaderboard here.