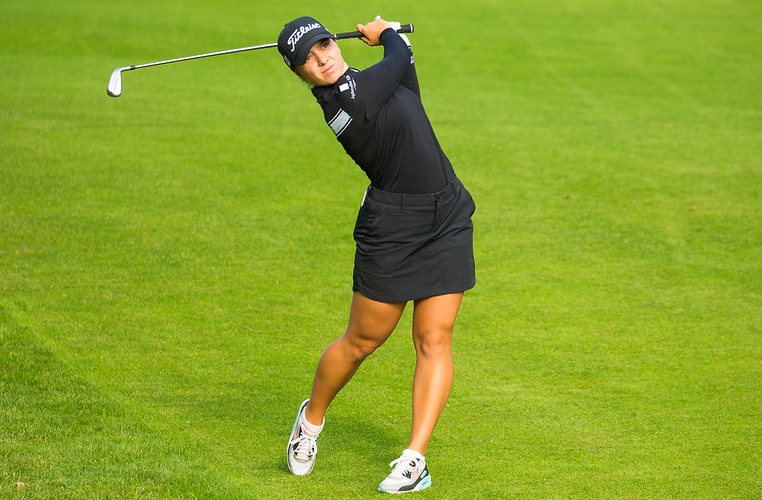 Australia’s Stephanie Kyriacou and Finland’s Sanna Nuutinen both carded rounds of 65 to continue sharing the lead at the Big Green Egg Open.

The frontrunners, who were the overnight leaders, started the day on six-under-par but produced excellent rounds to finish on 13-under-par – four strokes clear of third place.

Kyriacou got off to a superb start rolling in four consecutive birdies on holes three through to six and made the turn in 32.

The 2020 LET Rookie of the Year made another four birdies on the back nine, only dropping a shot on 17, to finish the day tied at the top.

“I was having fun out there; I was holing some long putts which is always enjoyable. I am pretty excited, we both played really well so it was anyone’s game the whole day. It will be interesting tomorrow. I haven’t thought about what it would mean but it would be great to get my first professional win,” the 20-year-old said.

Nuutinen’s recent consistency continued to shine as she carded a bogey-free third round to remain in a share of the lead alongside the Australian.

The Finn rolled in back-to-back birdies on the third and fourth holes, before making two more on eight and nine to keep pace with Kyriacou.

The three-time LET Access Series winner finished her round with three birdies in her final six holes to stay at the top of the leaderboard.

“It was great. Always when I play bogey-free that is a good day at the office. As the round went on and we both kept making birdies then I got a little bit of energy off of how she was playing and her birdies. Let’s continue tomorrow where we left off today. I’m not trying to think about winning and I’m trying to stay in the process,” said Nuutinen.

Three-time LET winner Atthaya Thitikul carded a round of 67 to put her in solo third place on nine-under-par.

The Thai teenager only dropped one shot in her third round and rolled in six birdies including three consecutively on 15, 16 and 17.

Austria’s Christine Wolf produced an excellent round of 66 to climb up the leaderboard and sit T4 for the tournament on six-under-par alongside Scotland’s Kylie Henry.

Germany’s Olivia Cowan is in sixth place on five-under-par after rounds of 72, 69 and 70, while six players are a shot further back including Dutch golfer Dewi Weber.