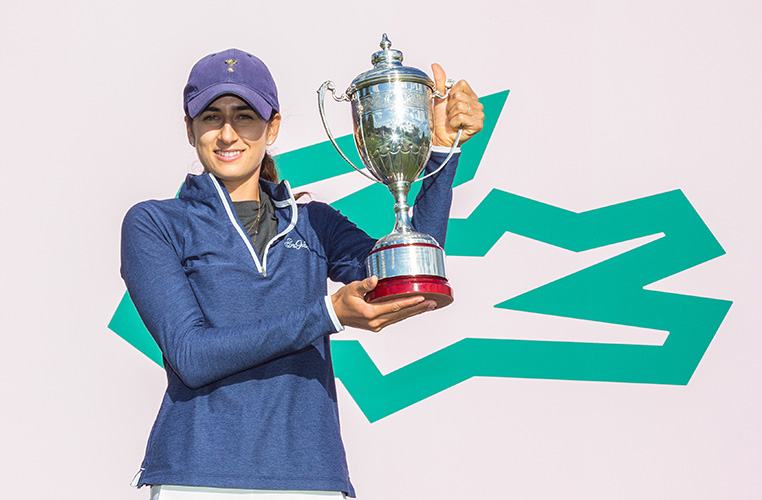 The 24-year-old from Casablanca defeated Meghan MacLaren with a bogey five on the first play-off hole, the par-4 18th, at Golf Barrière.

Laklalech started the last day with a one-stroke lead but MacLaren had taken the advantage after five holes in the final round. The Englishwoman held a two stroke lead with four holes to play but Laklalech birdied the long 16th and then MacLaren bogeyed the short 17th, meaning that the pair were tied coming to the par-4 18th hole.

After taking regulation pars and tying on 14-under-par 199, the pair returned to the 18th tee for a play-off, but this time, MacLaren put her drive into the long rough on the left of the fairway and couldn’t get her ball out at the first attempt. She had to take a penalty drop and played her fourth shot onto the green, whereas Laklalech reached the front of the green in two blows.

After MacLaren made a six, Laklalech won with a five and was able to celebrate becoming the first Arab woman to claim an LET title with her husband, Ali, who is also her caddie.

“It feels amazing,” said a tearful Laklalech. “It’s special to hear it. I don’t have any words to describe this.

“I’m surprised because the last time I was in contention was in Sweden at the Skaftö Open and I lost it over the last few holes. I was just too tense physically and I was very, very surprised with the way I felt physically today. I didn’t control anything. I felt sure that the past experience in Sweden would help me today and it did. I just played my game, played quite well and I’m just so happy.

“Of course going to the tee box in the playoff I felt very nervous but I hit a good shot and it was unfortunate how it ended, because Meghan didn’t have a good lie, but I feel like this is a two-in-one. I experienced a play-off and a victory at the same time. This is definitely something that I will remember for the rest of my life.”

Laklalech is a big fan of Tunisian tennis star Ons Jabeur and she hopes that her victory will inspire more Arabic girls to follow their dreams to play on Tour. “Morocco is doing a great job in promoting golf and I think having a Moroccan winning on a major tour will be huge for the country and for the Arab world in general,” she said.

The whisker-thin loss was tough for MacLaren, who prior to her 53rd hole hadn’t recorded a bogey since the first hole on the opening day and recorded a final round of four-under-par 67.

She said: “Those are the fine margins that we win or lose by and it’s a golf tournament, so it happened to me today. Ines is a great player. We played together at Q School and she’s gritty and not going to go away. She deserves it today.”

Diksha Dagar of India finished in third place on 11-under-par after a final round of seven-under-par 64 and she thanked her father for his guidance as her caddie during the tournament.

She said: “I’m very happy to see the direction that my game is heading in. Unfortunately, on the first day, I had six birdies but a number of bogeys, so I was thinking that I needed to cut down the bogeys. I didn’t know the course very well but then I learned more about the clubs I should be selecting. Me and my dad had very good team work today and we selected the clubs well together and finally my putts started to drop.”

A stroke further back, Anais Meysonnier of France ended in outright fourth place after a final round of five-under-par 66 and former champion Caroline Hedwall of Sweden finished in fifth.

Following her victory, Laklalech climbed 38 places to 14th on the Race to Costa del Sol and MacLaren moved up three spots to sixth.