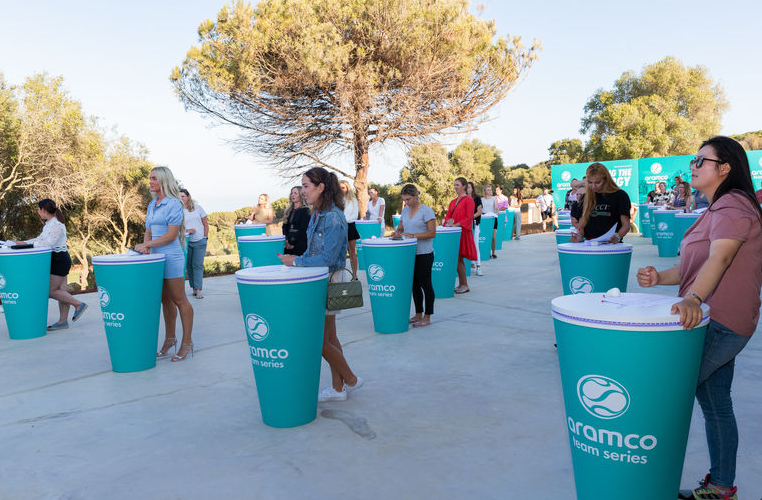 Law – who bagged two points to play a vital role in Team Europe’s incredible 14.5-13.5 victory over the United States two years ago – used her #1 pick in last night’s tournament draft to recruit ‘Beany’, who will once again captain the Europeans when they head State-side in September.

“I did have a feeling I was going to get to get a pick early on in the draft, so when I got the first and knew that Beany wasn’t a captain, it was an easy choice – and it is kind of funny,” said Law.

Asked if she will use the three-day $1million team event to pitch her case for a captain’s pick for this year’s Solheim Cup, the 26-year-old said: “We’ll just have fun! I have ultimate respect for Catriona and obviously we’re good friends as well, so it will be great.

“We’ve been paired with Laura Murray too, another Scot who is really talented. My caddie’s a Scot too, so we’ve got a little bit of Team Scotland going on! I can’t wait.”

This week’s event on the southern Spanish coast is the second of four Aramco Team Series events added to the Ladies European Tour for the first time this year, where players compete in teams of three but also have the opportunity of winning big as individuals, too.

Each team comprises a captain, a captain’s pick, a randomly assigned third professional player, and an amateur.

London played host to the first round of the Aramco Team Series last month, which was won by Team Olivia Cowan, which featured the German as captain, fellow German Sarina Schmidt, Indian Diksha Dagar, and amateur Andy Kelsey.

With her own early pick in the draft, Cowan did not think twice about getting the band back together for Sotogrande, once again opting for good friend Schmidt as her captain’s pick, before being randomly assigned Anaelle Carnet of France.

“I’m chuffed,” said the German. “I knew Sarina was going to be on a lot of player’s radars, especially Angel Yin’s because the three of us spent a lot of time together last week in Northern Ireland, so they’re now good friends. I was very happy to be in front of Angel in the pick!

“The goal is definitely to go out and win it again. We won it last time and worked well as a great time, so what’s to stop us?”

US star Lizette Salas used a coaching-connection to recruit Spanish star Harang Lee to her team, after learning they both shared the same coach.

Salas explained: “Harang’s former college coach is my former assistant coach, so I’ve heard a lot about her prior to this. When I saw her name on the draft list, she was on my radar. Then I was given the second overall pick and it was a no-brainer.

“I’ve heard she’s long and a lot of other good things about her, so I think we’ll make a good team.”

The Aramco Team Series – Sotogrande gets underway on Thursday at La Reserva Club, Sotogrande – running through until Saturday.

Free tickets remain available online at www.aramcoteamseries.com/sotogrande, with the tournament adhering to all COVID-19 protocols, as well as local and government guidelines.