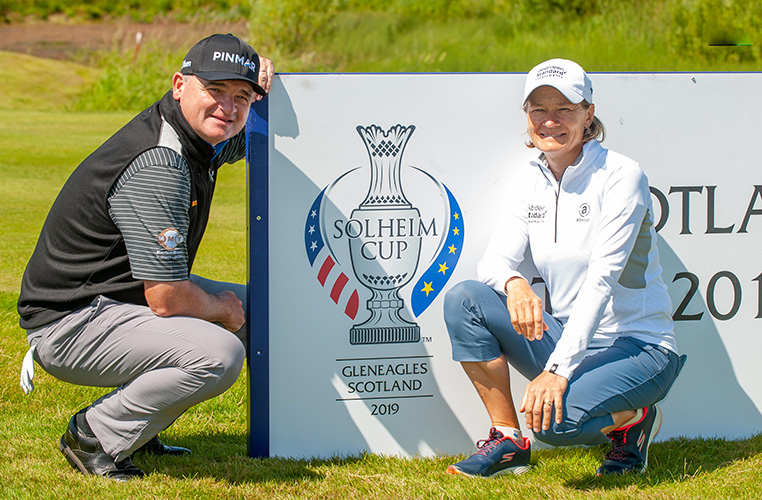 Former Open Champion Paul Lawrie has urged Scottish golf fans to turn out in support of Catriona Matthew and Team Europe at The 2019 Solheim Cup and insists a passionate home crowd can inspire them to victory over the Americans at Gleneagles in September.

Lawrie, who has two Ryder Cup appearances for Team Europe to his name including playing a role in the famous Miracle at Medinah in 2012, believes the home crowd could hold the key to the battle between the European and US teams and says that the European players will thrive under the leadership of fellow Scot, Matthew.

The Aberdonian announced his support for The 2019 Solheim Cup during a one-off head-to-head challenge match with Matthew at the Paul Lawrie Golf Centre in Aberdeen, in aid of the Paul Lawrie Foundation.

The pair, who are Scotland’s last two Major champions following Lawrie’s Open victory in 1999 and Matthew’s Women’s British Open win in 2009, went head to head in a nine-hole par-3 competition just two months before Matthew will lead the European team at Gleneagles from 9-15 September.

Lawrie, who was also Vice Captain to Darren Clarke in The 2016 Ryder Cup, said: “I’m really excited about The 2019 Solheim Cup coming to Gleneagles this year. There is always something special about a match between European and US teams because of the historic rivalry and that will be no different at Gleneagles.

“The home crowd will be crucial to the overall result and I’d call on all Scottish golf fans to turn out in support of Catriona and the European team. Knowing Catriona well, I know she will be an exceptional captain and will be great in the dressing room inspiring the players but the backing of the home crowd will also help take the team to the next level.

“All of the Ryder Cup matches I’ve been involved in have been in the US so I know how difficult it is to overcome a passionate crowd and that’s exactly what the US team will face in Scotland, albeit I know they’ll also be hugely respectful of both teams.”

With tickets priced from just £25 for adults and with under-16’s enjoying free entry, there has already been huge demand from golf fans, with around 100,000 spectators expected to attend.

There is also a big focus on catering for families at the event with lots of come-and-try activities in the spectator village aimed at both children and adults, while Thursday’s Opening Ceremony day will see a full schedule of entertainment culminating in Scottish rock band Texas as the headline act.

Lawrie added: “There is no doubt that Gleneagles is going to be a terrific host venue for The Solheim Cup. Both teams will love being on site in the hotel so close to the golf course while the course itself is a great Match Play venue as well as offering a great spectator viewing experience with lots of raised viewing areas.

“With Gleneagles being so central it’s also easy to get to so there is no excuse for not getting there to get behind Catriona and the European team.”

Tickets are on sale now, with some categories already sold out. For more information visit www.solheimcup2019.com