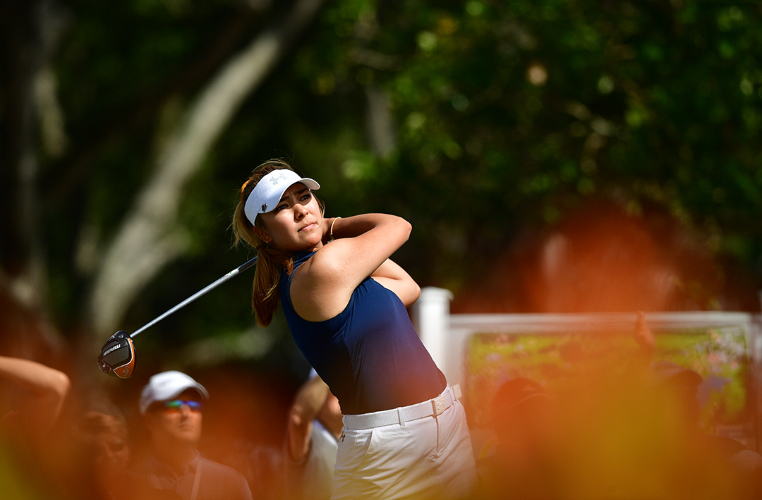 Not even 50 hours of travel could stop American Alison Lee making her LET debut this week at the OMEGA Dubai Moonlight Classic which gets underway tomorrow at the world-renowned Faldo Course at The Emirates Golf Club.

The 25-year-old might be a veteran of the LPGA Tour and has participated in as many as 24 Major Championships but the former Solheim Cup star tees it up in Dubai for the first time tomorrow in the afternoon wave after a mammoth 50 hours of travel from her home in Nevada.

Despite her unexpected late arrival, Lee, who was the last player in the 56-woman field to register was in good spirits ahead of her debut.

“My game is in good shape and I thought it would a really cool opportunity to play one more event before my off-season. This is my first time in Dubai and the Middle East, and I am really excited to be playing in an LET-sanctioned event.”

With the field smaller than usual, and with players enjoying the option to play the course throughout the day and night, Lee has barely seen a soul since arriving late yesterday but managed to keep up a tradition she’s used to fulfilling in the U.S.

“I played a practice round today with Bronte Law, she’s one of my best friends so it kind of feels like home despite being so far away. We played 18 holes and ironically managed to do the front nine in daylight and the back nine in the dark so although I’ve only had a day to prepare, I’ve managed to get a taste of both playing conditions.”

The world’s first day-night Tour event is an interesting prospect in itself but the unique pro-am format, which sees the professionals pair up with a team of amateurs on the first two days, added to the appeal for Lee.

“I’ve never really played night golf and I have been intrigued by this event for a while. I am so impressed by the lights because I was worried about seeing the ball and the shadows, but you can see everything. The format this week is really cool and it will be chilled compared to usually playing against the other players so I am looking forward to that.”

Set amongst the Dubai skyline, the breath-taking views on offer were not wasted on the Californian.

“The views are unbelievable, and it definitely adds character to the golf course because you know where you are. Sometimes in the U.S. you are in the middle of nowhere, and I’ve never seen anything like this. I brought my caddie with me and he’s been amazed too.”

Off in the afternoon wave at 4pm (local time), Lee may not be heading to bed anytime soon but one thing that is for sure, if she brings her ‘A’ game tomorrow night, she’ll be ready to shoot the lights out.

Check out the full draw for round one – HERE