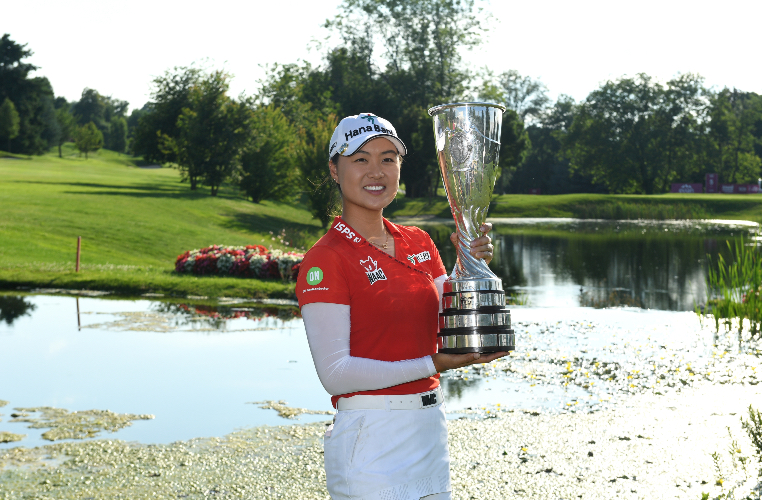 Australian Minjee Lee secured her first Major title after beating Jeongeun Lee6 in a playoff at The Amundi Evian Championship.

The 25-year-old, who started the day seven strokes behind overnight leader Lee6, fired a final round of 64 (-7) to set the clubhouse lead of 18-under-par.

With three consecutive birdies to close her round, Lee6 forced a playoff which took place on the par-five 18th where both leaders hit the fairway with their tee shots.

Lee hit the green in two and Lee6 tried to follow her footsteps but hit it short into the water meaning it was the Australian who came out on top at Evian Resort Golf Club.

“I’m speechless. I’ve been waiting for this for so long. It just feels unreal to have won. Just even in the playoff, and all throughout today, I played really well to get myself in that position, and I’m just really happy,” said the Major champion.

After rounds of 68, 69 and 65, Lee had an excellent final day rolling in seven birdies – including four in her last five holes – to card a bogey-free round.

She added: “After nine holes I think I was like one back from the lead, so I knew I had to play really well to have a chance to win. So, I just tried to give myself as many birdie opportunities as I could on that back nine, because it was warm out and it was playing quite short, so I had a lot of short clubs in.”

South Korea’s Lee6 led heading into the final round but struggled on the front nine making one birdie and five bogeys.

However, the 25-year-old regained some momentum on the back nine with a birdie on the 12th before rolling in three more birdies in her final three holes to shoot even par 71 and force a playoff.

“I just didn’t feel good on the front nine. I tried my best, but the result wasn’t good. Back nine was a new nine, so I kept telling myself I could do it, I could make it. So, it was just the swing rhythm and then the putts dropped,” said Lee6.

“I wanted to show the Korean flag for the Korean fans, and I am disappointed I couldn’t get it done. I missed the shot on the playoff hole because my body was getting tired.”

American Yealimi Noh was also in the mix towards the end of her round but missed a birdie chance on the last hole to join the playoff.

Noh said: “I take away a lot of positives from this week. It’s been my best major finish I think, and I’m just really glad to have been in this position in the first place and to play with major champions.”

Japan’s Ayaka Furue finished fourth on 15-under-par after shooting four-under-par 67 with two bogeys and six birdies on the final day.

2021 Race to Costa del Sol leader Atthaya Thitikul from Thailand fired a great round of six-under-par 65 to claim the fifth place – her career best in a Major tournament.

Hall finished her round in style with an eagle on the last to shoot seven-under-par 64, while Maguire matched the best score ever played in a Major tournament with a final round of 10-under-par (61).

Maguire said: “We saw Lee6 do it the other day and you know it is possible, but everything has to go your way. I felt like I have been playing really well the last couple days; I just didn’t hole any putts. I think I got my fair share today and I made two really good pars on 12 and 13, which kept the momentum going, which was nearly as important as some of the birdies.”

With her fifth-place finish at Evian, Thitikul has extended her lead at the top of the 2021 Race to Costa del Sol Rankings.