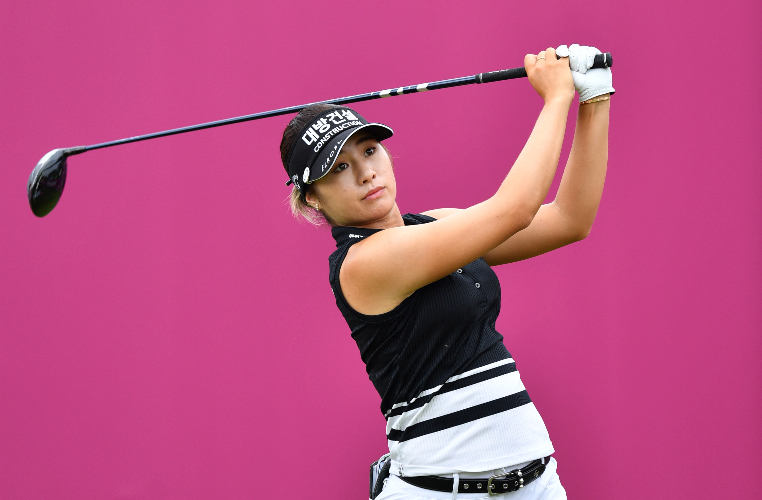 South Korean Jeongeun Lee6 carded a third round of 68 (-3) to extend her lead to five shots at The Amundi Evian Championship.

The leader had a slower start to the day with a bogey on the par-four third hole, but bounced back with two birdies on the front nine.

Despite opening the back nine with a bogey, the 25-year-old recovered well when she holed out for eagle on the par-four 11th.

Lee6 then rolled in a birdie on 15 before dropping a shot on 17 but closed her round with a birdie on the last to be 18-under-par for the tournament.

“I’m satisfied with my result today because some shots were a little bit of a miss, but I did up and downs well. I played in the morning yesterday but in the afternoon today, so the green speed is very different. I’ll just focus on the green speed tomorrow,” she said.

Second place is held by American Yealimi Noh, who had a tremendous finish to her round with three consecutive birdies.

The 19-year-old shot a round of four-under-par (67) to sit on 13-under-par for the tournament after the third round.

Noh said: “I think I was kind of in a rut hitting my irons. After the turn I wasn’t hitting it as well, especially when my ball was above my feet, I was having a little trouble. I was pushing it and pulling it, I couldn’t get it right. The shot on 16 really boosted my confidence for the next couple holes.”

New Zealand’s Lydia Ko had a bogey-free day at the Evian Resort Golf Cub with birdies on holes three, seven and 15.

The 2015 Evian Champion is one shot further back in third place on 12-under-par after shooting a 68 in round three.

“I felt like I played really solid. Missed a couple short ones. I put really good strokes on it, but I just misread them. All I can do is be committed and hit good shots and go from there,” she said. “I don’t really know how many shots behind I am, but I have got to focus on my game and hope for nice sunny weather tomorrow and see where that puts me at the end of the day.”

Three players are tied for fourth place on 11-under-par including Australia’s Minjee Lee who matched the round of the day – a six-under-par 65 – and closed her round with four consecutive birdies.

She sits alongside Japan’s Ayaka Furue, who added another round in the red of three-under 68, and Thailand’s Pajaree Anannarukarn, who shot one-over-par 72.

Thailand’s Ariya Jutanugarn sits in seventh place on 10-under-par, while England’s Charley is another shot further back in T8 with South Korean duo Hyo-Joo Kim and In Gee Chun.

Hull carded a round of 66 which included an exceptional back nine with four birdies and an eagle in her last ten holes.

She said: “I feel like I’m in a good place at the minute. I just kept focused, I knew there was plenty of birdie chances out there, so I just kept in the zone. Top-10 is always good, top-5 is always good. Even a win is good, so I gotta make some more birdies tomorrow to get that win.”

Five players are T11 on eight-under-par including Matilda Castren, who had a consistent round of 68, Emily Kristine Pedersen carded a two-under-par 69 and 18-year-old Atthaya Thitikul posted a round of 70.