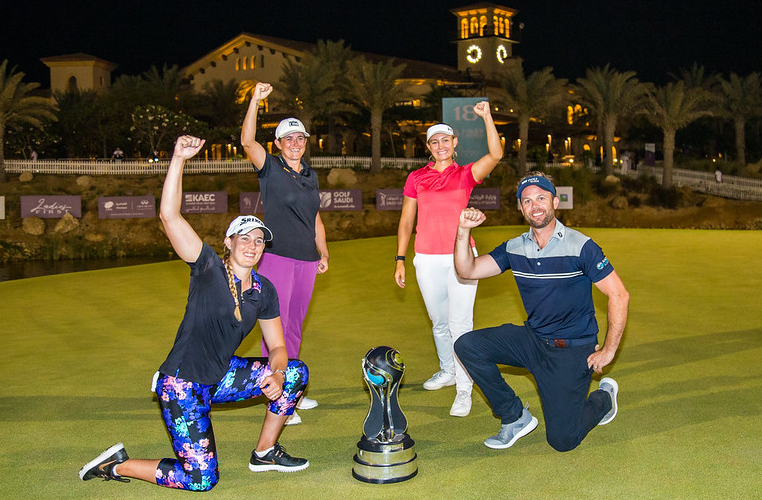 The concept was created with the help of LET CEO Alexandra Armas in 2020 which saw players given an additional playing opportunity in Saudi Arabia.

Three professionals played in a team alongside an amateur with an individual and team competition happening side by side.

In 2021, this idea evolved into the Aramco Team Series with events in London, Sotogrande and New York having taken place.

We take a look back at the tournament in Saudi Arabia, as well as what has happened at the ATS tournaments this year.

Denmark’s Emily Kristine Pedersen completed the ‘Saudi Sweep’ of titles, adding to her season’s trophy haul with victory in both the ‘team’ and ‘individual’ standings at the inaugural Saudi Ladies Team International.

Playing alongside partners Scotland’s Michele Thomson, South Africa’s Casandra Hall and English amateur Matt Selby, Pedersen fired a relentless bogey-free final-round 67 (-5) to win the individual title by two shots at 14-under-par and spearhead her side to a slender one-shot win in the team event at 40-under-par.

“I can’t believe what’s happened this season, I was confident I could get back to where I was, but I couldn’t imagine that it would be like this. It’s been a strange year for all of us with COVID but while everyone’s saying it is the worst year, I’m having the best year ever, so that’s a little weird but I am really happy,” said the 2020 Race to Costa del Sol champion.

Team Cowan finished the Aramco Team Series – London in style as they recorded a final round of 12-under-par to secure a three-stroke victory at Centurion Club.

After starting the day two strokes in front, Olivia Cowan, Sarina Schmidt, Diksha Dagar and amateur Andrew Kelsey produced a thrilling back nine as they combined to win with a total of 41-under-par.

Cowan said: “I can’t put it in words how amazing it is. To share it with one of my best friends is just incredible as well. I got really lucky with my team. I knew I wanted to pick Sarina two weeks ago and then to have Diksha on the team as well – I knew she was a great player and that she could hole some putts – so, I knew we had a good chance. We all just complemented each other. We were all so great out there – we are a proper team.”

It was an excellent day for captain Marianne Skarpnord as she carded a round of 68 (-5) to tie with Thailand’s Atthaya Thitikul on 13-under-par at the top of the leaderboard.

The duo headed back up to 18 and on their second time, the Norwegian rolled in her birdie putt to clinch the individual title – her fifth on the LET.

Skarpnord said: “It was won with a lot of nerves. On the short putts, my hands were nearly shaking. To win this event is very special. I think this concept is so, so good and we’ve had so much fun this week. I love the format. It’s so much fun when you’re a team and you have to do well for someone else as well – not just yourself.”

After starting the day one stroke behind, Ashleigh Buhai, Stacy Lee Bregman, Hayley Davis and amateur Ignacio Morillo produced a thrilling back nine as they combined to finish with a total of 35-under-par.

Once a playoff was confirmed, captain Buhai headed back down 18 and made a par to secure her fourth LET victory, while it was a first LET title for Bregman and Davis.

“It was a team effort; we all pulled our part this week. Me personally, I turned even, and I thought okay I have got to get something going now if we’re going to have a chance and luckily, I managed to do that and went four-under-par on the back nine,” said Buhai.

In the individual standings, American Alison Lee stormed to a five-shot victory and captured her first win as a professional.

After carding rounds of 65 on the first two days, Lee produced a solid round of 71 (-1) which included four birdies and three bogeys to clinch the title.

“It was a lot of fun. It didn’t really sink in until my friend Lindsey [Weaver] came over. It still doesn’t feel right thinking that I have won my first event as a pro due to the format and not knowing what the other girls were doing. I’m so glad I came here. This is my first time in Spain, playing on the LET, I’m so happy with my decision,” said the 2015 Solheim Cup player.

After starting the day two strokes behind the overnight leaders, Jessica Korda, Karolin Lampert, Lina Boqvist and amateur Alexandra O’Laughlin produced another solid round to finish with a total of 41-under-par.

With the sun having set in New York, captain J Korda headed to the floodlit 17th to compete in the playoff against Sophia Popov and her par was enough to clinch her second LET title, while it was a first LET title for Lampert and Boqvist.

“I honestly was just praying for good speed on the green, I wasn’t sure how hard to hit it, it was playing so different to when we were out there during the round. It was really tough,” said Korda speaking of the playoff.

Off the back of the sensational team performance, it was Charley Hull who recorded the round of the day in the individual competition.

After starting her round with four consecutive birdies, the Solheim Cup star carded a flawless round of 65 (-7) to catapult her to 12-under-par and win the individual title – her third LET victory.

“I was playing well the first couple of days, but today I really got it going. It was tricky conditions out there, so that is probably one of the best rounds I have played ever. I was very proud of myself and to finish with a birdie I’m very happy,” said the 25-year-old.