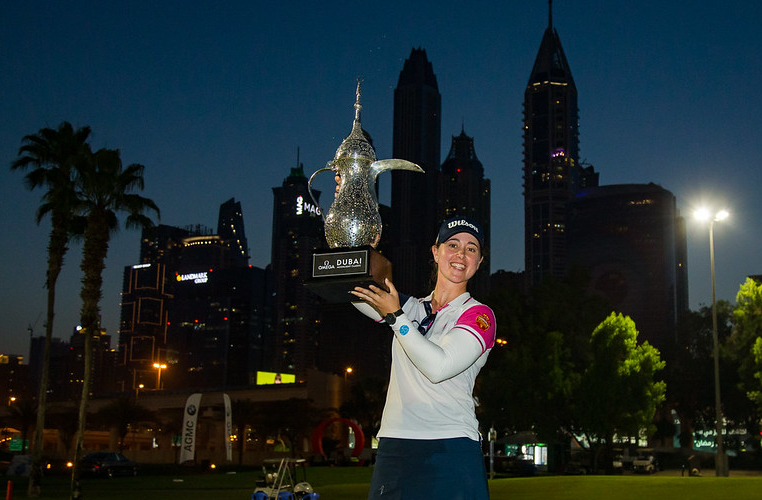 Another week and another destination for the Ladies European Tour as the players head to the hotter climes of the United Arab Emirates for the Dubai Moonlight Classic.

The Emirates Faldo Course plays host to the tournament which has been a permanent fixture on the calendar since 2006, but the event has evolved in recent years.

Last time out in Dubai, it was Australian Minjee Lee who captured her second LET title in a playoff against France’s Celine Boutier.

Heading into the week, Lee was the highest-ranked player to tee it up and managed to finish at the top of the leaderboard in regulation on 10-under-par alongside the French Solheim Cup star.

The duo headed back out to play the first extra hole and it was the Aussie who rolled in a clutch birdie putt from 20ft to secure the crown.

Speaking after her victory, she said: “I couldn’t really see the break too well on the last hole, but I thought it would be about two cups outside the right and luckily I hit it hard enough and it dropped. It feels pretty special to be playing here at night-time and the course has been amazing. It’s been a really fun week.”

The Faldo course, designed by Sir Nick Faldo, made floodlights an integral part of the design and this was the world’s first ever professional day-night golf tournament.

Rounds of 68, 67 and 71 for a total of 10-under-par ensured the Spaniard secured her third LET crown as she finished one stroke ahead of German duo Olivia Cowan and Esther Henseleit.

“It’s amazing to win again and I’m so excited. Congratulations to Esther, Olivia and every player in the field. It was so cool. I loved playing in the first-day night tournament, and I hope to come back next year,” said Iturrioz.

Angel Yin displayed her vast potential and power off the tee as well as a soft touch around the greens in a three-way playoff in a riveting finish at Emirates Golf Club.

The American saved par after finding the water on the closing hole in a bogey-free final round of 67 to match the clubhouse target of a 15-under-par set by South Korea’s In-Kyung Kim and Celine Herbin of France.

Yin, who averages 276.75 yards off the tee, and Kim birdied the first extra hole (the 18th) to stay in the hunt while Herbin was eliminated after finding the water with her third shot.

A tap-in birdie on the drivable second playoff hole (254-yard, 17th) saw Yin clinch the issue as the South Korean agonizingly missed her birdie effort in the first ever play-off since the tournament’s inception in 2006.