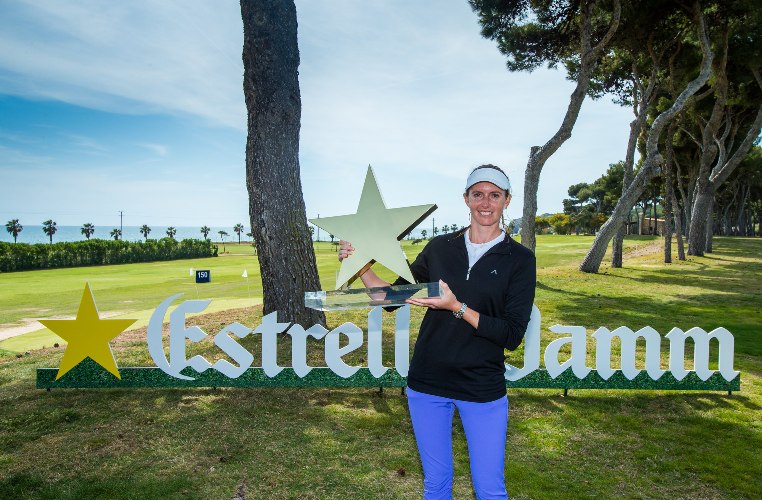 The Ladies European Tour returns with a trip to Spain this week, as Club de Golf Terramar prepares for the fourth staging of the Estrella Damm Ladies Open.

The venue – located a stone’s throw from the beautiful beaches of Sitges on the East coast of the country – began hosting tour events in 2017, with three consecutive events before a brief hiatus in 2020.

Despite it being a fairly new event on the LET calendar, there has been plenty of drama in the previous stagings of the tournaments, including three-way playoffs and a popular home winner.

The inaugural Estrella Damm Ladies Open had one of the most nail-biting finishes in recent history, with Florentyna Parker, Anna Nordqvist and Carlota Ciganda all level on -15 after 72 holes on the shore of the Mediterranean Sea.

England’s Mel Reid held the advantage heading into the final day, with the trio four shots behind the leader with 18 holes left to play, but with all three shooting 66 (-5) on day four they sat tied at the top, with Ciganda missing the chance to take the win as her birdie putt lipped out on the last.

And the home favourite was soon out of the running as she missed another birdie attempt on the first playoff hole, leaving Parker and Nordqvist to battle it out for supremacy.

You could cut the tension with a knife as the second and third extra holes saw both players secure pars, before Parker set up a perfect three-foot birdie opportunity on the fourth to seal the deal, and she made no mistake from close range.

It was the Englishwoman’s third win on tour, following successes at the 2010 ABN AMRO Ladies Open and 2014 Ladies Italian Open, and her most recent to date.

With the 2017 Solheim Cup on the horizon, the victory was vital for Parker to put herself into contention, and ultimately helped her to qualify for Team Europe four years ago, and the occasion wasn’t lost on her at the time.

Parker said: “I knew I had to win. I know I’m not going to get picked for The Solheim Cup, so I know I have to qualify automatically. I think today I’ve proved that I can play against the best and best them, so I’m really happy.”

“You’re up against the best players in the world, they come over from the LPGA and it’s so good to beat them! I was putting quite well towards the end and I knew that 18th green off by heart, so I knew it was going to go in. Luckily, she missed!”

From one of the closest finishes we go to one of the most dominant displays on course, as Anne Van Dam produced one of the best four-day performances in 2018 to take an eight-shot victory.

The Dutch star carded rounds of 64, 64, 65 and 65 three years ago to finish on a remarkable final score of -26 in Sitges, with Caroline Masson, Caroline Hedwall and amateur Selin Hyun settling for T2 on -18.

The 2019 Solheim Cup winner was in scintillating form from start to finish that week in September, as she started the week sitting seven shots under par and two shots behind first day leader Celine Herbin (-9).

But where Herbin could only follow that up with a level-par score of 71 on the Friday, Van Dam doubled down to produce a second successive score of 64 to give her a four-shot advantage after day two ahead of home favourite Carmen Alonso.

And once she got to the top of the leaderboard, she never looked like relinquishing her advantage, with a 65 (-6) to start the weekend putting her five shots to the good heading into Sunday, before picking up six more shots in her final round to finish the job.

Spain proved to be a happy hunting ground for Van Dam that year, as she secured another victory in the Andalucia Open De Espana two months later, and the win is Sitges is one she will always remember.

“I didn’t feel nervous today, but it’s golf. You can easily shoot nine or ten under on this course and you can mess it up pretty easily as well,” she said after her win.

“I’m so pleased with the way I played, especially today. It was not easy, starting with a big lead and knowing that on this course, people can shoot nine-under.

“It was hard not to think about that the last few holes, to stay in it and not move too far ahead. It was nice walking up the 18th and beautiful scenery here with the sea and all the people. I will never forget it.”

The summer of 2019 was already one to remember for Carlota Ciganda, and her victory at Club de Golf Terramar capped off a magnificent year for the Spaniard.

Having helped Team Europe to victory in the Solheim Cup just a matter of weeks before, Ciganda was walking on cloud nine as she headed back to her home country, and her confidence was there for all to see as she marauded around the fairways in Sitges.

Even a first round score of 72 (+1) couldn’t dampen her mood, as she came back with a vengeance on days two and three with scores of 68 (-3) and 65 (-6) to leave her in contention heading into the final day.

And as overnight leader Laura Fuenfstueck saw her two shot advantage disintegrate in the early stages of Sunday, Ciganda was ready to pounce, with a steady level-par round to finish the weekend seeing her finish on -8 and edge out Esther Henseleit by a single shot.

It was a tale of redemption for the Spanish star after coming so close to victory two years before, and she was able to put her demons to bed after sinking a par putt on 18th to take the win.

Ciganda said: “I just said keep your head still and make this putt and win the tournament. I don’t want to go through another play-off because anything can happen and the putt went in, so I’m very, very happy.

“I’m very happy to win in Spain, with all the people here. My family is here and playing in Spain is always very special.”