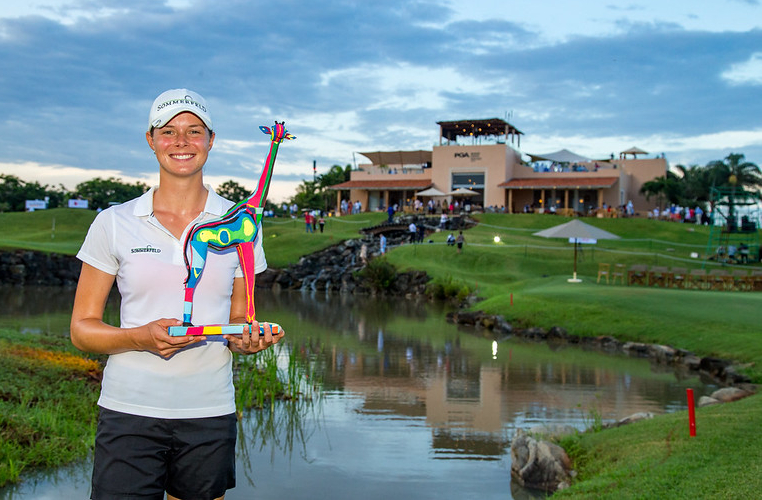 The first edition of the Magical Kenya Ladies Open took place in 2019 and it was also the season finale for the LET that year.

Vipingo Ridge near Mombasa was the host venue and it saw a dramatic win for Germany’s Esther Henseleit, who carded a final day course record.

The young German recorded an eight-under-par 64 in the last round to capture her maiden LET title and catapult to the top of the Order of Merit.

With her victory, Henseleit became the third player in LET history to win the Order of Merit and Rookie of the Year titles in the same season.

The then 20-year-old started the final day seven strokes behind Sweden’s Julia Engström but quickly made a charge up the leaderboard with birdies on the first, fourth, sixth, seventh and ninth holes to be within two of Engström at the turn.

In a battle of the back nine, Engström three-putted the 10th while Henseleit birdied the 11th and the pair were locked together on 12-under-par.

Henseleit added two further birdies and despite India’s Aditi Ashok carding two birdies in the last three holes to cut her lead to one stroke, the German came out on top to secure her breakthrough LET win.

Speaking at the time, Henseleit said: “To close the season with a win is the best feeling I could imagine. To be the Order of Merit winner and Rookie of the Year is just unbelievable.

“Yesterday, after my round, I was a bit disappointed, but I just tried to do everything better today. I definitely tried to win, although I knew it would be really hard.

“After nine holes, I saw I was two shots back and I knew it was possible. I just tried to make a lot of birdies and I hit some great iron shots and gave myself many short birdie putts. The course was beautiful and it played a bit easier today, because the greens were softer. I did the best I could.”