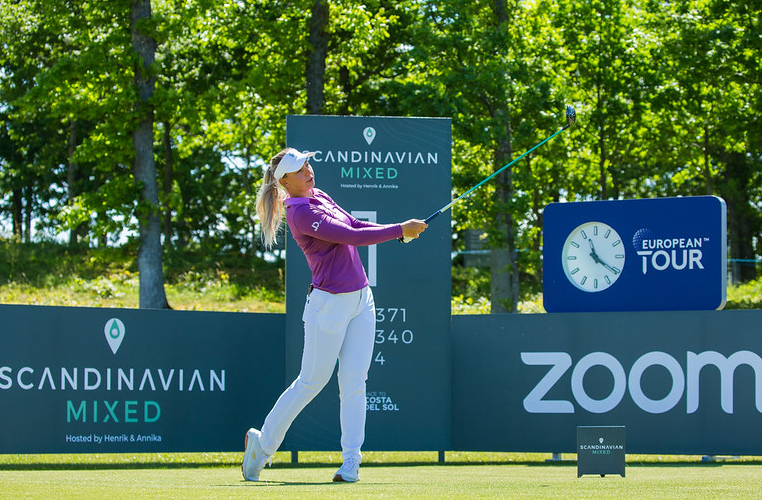 Emily Kristine Pedersen, Meghan MacLaren and Linda Wessberg all hope that this week’s Scandinavian Mixed will lead to a higher profile for the women’s game.

The tournament sees men and women compete in the same field for the same trophy and prize fund at Vallda Golf and Country Club.

2020 Race to Costa del Sol champion Pedersen believes if this week is a success there will be more mixed events in the future.

“I think it’s really great that men and women are playing together, I think it will be interesting playing in the same field,” she said. “Hopefully, it will especially raise the women’s game through events like this and I hope it will be a success and there’s going to be a few more in the future.

“I really wanted to come back to this event and I’m excited to come back and defend the Race to Costa del Sol, it’s such a good sponsor for the LET and I’m glad to support. Hopefully, I can defend it this year.”

For MacLaren, who finished second at the Jordan Mixed Open in 2019, the fact these events are happening, and it allows a new audience to see women’s golf is really important.

The two-time LET winner said: “I think golf has really unique position in sport in that it can bring together different genders. As players it offers a new perspective which I’ve personally really enjoyed, but also for the whole equality movement and for showcasing that there doesn’t have to be this big divide between men’s sport and women’s sport. Events like this are really important to bring that to a wider audience.

“I think the last couple of years have been really big. An event like this, it maybe isn’t talked about as much right now which is actually, I think a sign of the progress. It almost feels a little bit more normal which I think is the way that golf should be moving, and sport should be moving. Fingers crossed more fans can see it happen this week and enjoy a whole range of golf.”

Sweden’s Wessberg, who hails from Gothenburg, is loving being at home this week and hopes this tournament will grow the game.

The 2007 Solheim Cup player said: “I’ve been waiting for this for the last two years since we first announced we were going to have it. Since I’m from Gothenburg, it’s nice to finally introduce all my LET friends to my hometown. I’m really looking forward to it and I feel like we have nothing to lose here. For us, it’s something that can help us grow the game.

“I think it’s amazing. Annika doesn’t play anymore but for her to come here and play is huge. I’ve been privileged to play with quite a bit before – I played with her at the 2007 Solheim Cup in Halmstad and a little bit on the LPGA Tour. For Henrik to come home and put his name next to her is big as well.”