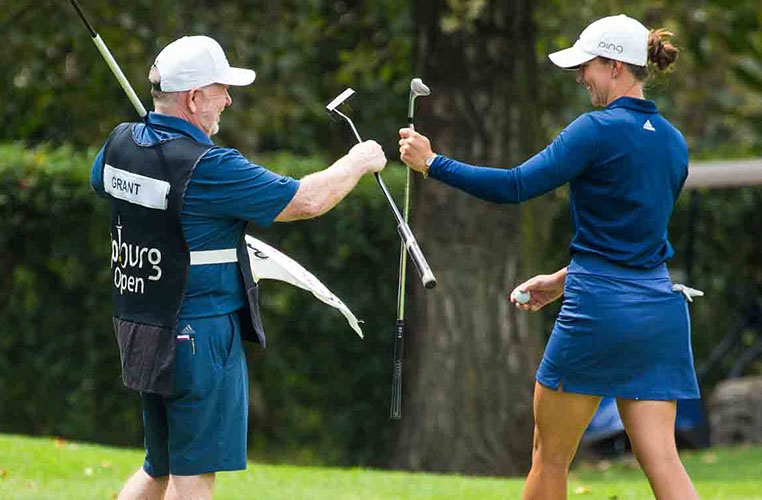 The golf world woke up last Sunday to some good news. And through the miracle of social media and other instant connections, fans around the globe scampered to televisions to watch The Volvo Scandinavian Mixed. There they saw Linn Grant make history by become the first woman to win a DP World Tour event. Even though the event was co-sanctioned with the Ladies European Tour and the women played different tees, Grant’s accomplishment brought smiles, shouts and a few tears from fans who might not have known the 22-year-old Swede before last week. And with all the hoopla and distraction from LIV Golf, Grant gave everyone in the game a reason to cheer.

But for at least one observer, the victory was no surprise. John Grant, Linn’s father who played golf professionally for about the time it takes a cup of coffee to get cold in Stockholm, knew that his daughter had this in her. And why wouldn’t he? Since turning pro last fall, Linn has won three times in South Africa, capturing the Sunshine Tour Order of Merit and one overlap event (the Joburg Ladies Open) with the LET. She also won once on the LET Access Series and captured another LET victory in Belgium before making history in Sweden, romping to a nine-shot win over Henrik Stenson and Marc Wilson.

“It’s not very Swedish to say it this way but I’m not surprised that she won,” John said. “However, I was a little surprised by the way she won and the number of strokes. I knew she had it in her but nine shots and the way she did it was a little bit of a surprise.”

It was also a nice early Father’s Day gift for a man who, like his own dad, put the game on hold for family.

John Grant is the son of Scottish professional Jim Grant, winner of the 1956 Scottish Boys Junior and a Walker Cup invitee. “He was a big talent,” John said of his father. “He was picked for tryouts for the Walker Cup but chose not to go because they were the same week as admissions to university. Back then you couldn’t just say, hey, I’ll come to admissions later. So he chose to go to school.”

There were thoughts of traveling to America to play on the PGA Tour, but with a child (John) on the way and a job as an assistant pro at a Scottish club where he was relegated to polishing members’ shoes, Jim immigrated to Sweden with the flow of British pros during the golf boom of 1965.

John grew up in the game and came to America to play college golf at the University of West Florida. That campus is located in Pensacola, home of the Blue Angles and an easy jaunt to the FloraBama Lounge, a ramshackle bar on the beach straddling the Florida-Alabama line, one that, back in the day, attracted jet jockeys from the navy training school, good ol’ boys from Baldwin County, Alabama and enough Dixie girls to keep both sides on their toes. As culture shocks go, a college golfer from Sweden couldn’t have immersed himself better.

“I chose my school because I thought the coach was a nice guy,” John said. “If I had to do it over again, I might have made a different choice.”

From there, he came back to Europe where he tried to play professionally. But like his father, a growing family put his tour ambitions away. “It wasn’t the life for me,” John said. “We started a family and there was no way I was going to travel and raise children. I used my education instead.”

He built a successful business in insurance and independent financial planning while raising a son, Jonathan, and two daughters, Amanda and the baby, Linn.

“When I took up golf again around 2006, I turned amateur and played in the European Championships and a little on the Swedish Senior Tour,” John said. “But for me to be able to play golf, I had to bring my kids along. When Linn was a little younger, she went with me. She got an ice cream and tagged along while I played.”

She wasn’t the best in the family at that age. “Jonathan was a really talented golfer at age 16 and 17,” John said. “But her older sister, Amanda, was the most talented. Sometimes you put a golf club in someone’s hands and you just see that they know how to hold it and swing it. Amanda was the one of my three who had the most talent. But she hated golf. She doesn’t play at all.”

Linn was a late bloomer. She played local and regional tournaments until she was about 12. John took her abroad as she matured. Linn played the Irish Girls Championship and the English U16 Girls. They also went to Miami, Florida for the Doral-Publix Junior Golf Classic every December.

“You know if you’re at your own club and everyone thinks you’re great, you don’t know anything else,” John said. “You might get ideas in your head that, hey, maybe I am the best. Taking her abroad gave her some perspective. You realize that there are 100 other girls just like me out here.”

Linn caught the attention of the Swedish National Team as an early teenager but there were others ahead of her – players like Frida Kinhult and Beatrice Wallin. Then at age 16, Linn won the Scandia Cup. From there, she qualified for the Junior Solheim Cup and earned a spot in the 2018 U.S. Women’s Open at Shoal Creek. Nobody missed her after that.

“She could have gone to any school,” John said. “So we made a list of all the things she wanted, and she graded each point. She actually put schools like UCLA, USC, Stanford and Wake Forest on the B list because, in Linn’s mind, those were schools where (academics) would take too much time. The A list included LSU, Alabama, Arizona, Arizona State, Florida, Florida State, Miami – schools where Linn thought she could handle day-to-day school and focus on golf.”

They visited all those schools and a few others, including Oklahoma State, which had a rich history of recruiting talented Swedish women.

“If Linn had picked with her heart, she would have picked LSU. She fell in love with LSU,” John said. “But she picked with her brain and chose Arizona State, which was absolutely the right pick.

“I actually thought Linn was ready (to turn pro). The hardest thing for a parent is knowing when to trust your child. After qualifying for the US Women’s Open at Shoal Creek and going to the Junior Solheim, I thought she was good enough to turn pro. She probably was, but Linn didn’t think she was ready.

“Linn does things in her way. She knows when she’s ready, when she wants to take the next step. She wanted to go to school in the U.S. and get the competition. We told the coach that we were doing it one year at a time.

“For her, it was a good transition. She moved away from home, played against different people, different types of grass, different conditions, different culture. It was best for her, for sure.”

Now, John waits for his daughter to come home to celebrate the history she made.

Linn said in London as she prepared to play the Aramco Team Series this week. “We didn’t celebrate (after the win). I wanted to get through this week in a good way and then I want to get home and celebrate.”

She was surprised by a few things. The BBC and CNN both asked for televised interviews and her social media following exploded from 8,000 Instagram followers before the first round of the Scandinavian Mixed to 25,000 a week later.

But for her father, this was the next step in a progression he saw coming – one he has the discipline and love to let Linn live out on her own.

“Even though she is my daughter, I’ve known Linn could win,” he said. “She is a good golfer. But she has the potential to be a very, very good golfer.”