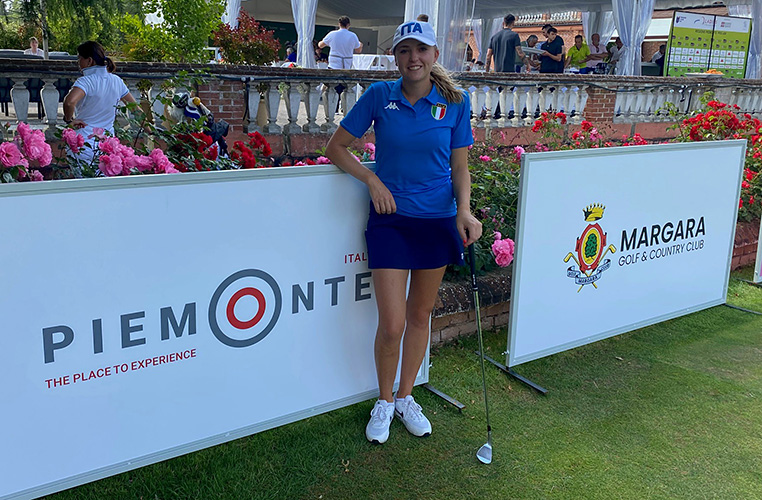 Caterina Don knows Golf Club Margara better than perhaps anyone in the field at the Ladies Italian Open presented by Piemonte.

This is her first appearance in the tournament and also her debut event on the LET, but the 21-year-old University of Georgia student lives in Pinerolo, a town and commune in Piedmont, northwestern Italy and she has played at the venue several times.

Speaking on the eve of the tournament, the Maths and Statistics Major, who is part of Team Italy, said: “I was really excited when I got a text saying that they had a wildcard for me. It’s really special. It’s my first LET event and so close to home and really interesting to see the people around. It’s a different atmosphere from amateur golf, for sure. There are a lot of people here that I haven’t seen for a long time. It’s really exciting.

“We used to have a tournament here that we played in the Fall and before I went to college I played on this course a lot of times. I even designed my own yardage book back in 2016. I think it’s playing as a different golf course. When we played, the tees were up and so it’s a bit longer and the greens are a bit faster, but it’s a really nice experience to be here and I’m looking forward to tomorrow.”

She will tee off alongside Lejan Lewthwaite and Verena Gimmy from the first at 9.14am on Thursday and it is expected to be hot, with temperatures of 30C in Fubine Monferrato.

The region of Piedmont offers striking contrasts in the landscape and Caterina grew up as a downhill skier from the age of three, skiing in the nearby Alps resort of Sestriere.

She added: “It put a really competitive spirit into me. It’s like a two minute run instead of a four-hour round or a multiple day tournament but it’s really fun.”

She chose golf and now plays at Royal Park I Roveri in Fiano (Turin), which hosted the Italian Disabled – Sanofi Open last week. With two more years of college to go, she is just enjoying the journey.

On her future plans she added: “Playing golf is my dream if I’m good enough to turn pro, but we’ll see where I am in two years’ time.”