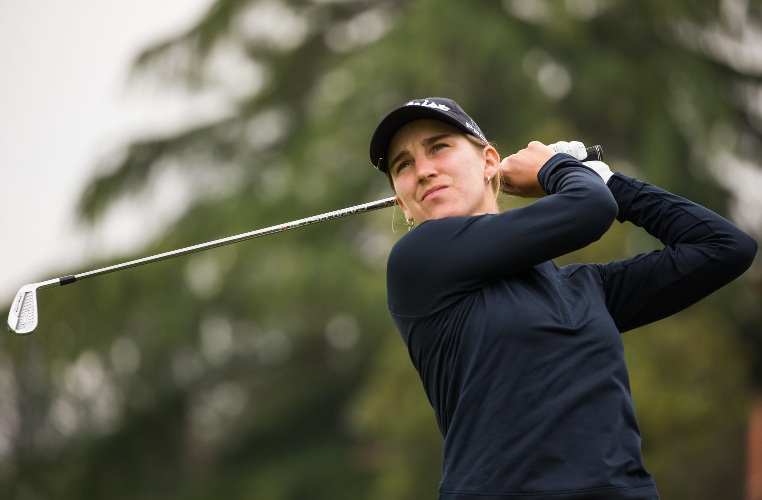 Despite its rich sporting history, South America has never been renowned as a hotbed of golfing activity, but Magdalena Simmermacher is on a mission to change that.

There has only been a single woman hailing from the continent that has lifted a Major trophy aloft – with Peru-born Jenny Lidback doing so at the 1995 du Maurier Classic – and currently no South American within the top 250 of the Rolex World Rankings.

But in 258th position currently sits Simmermacher, with the 25-year-old continuing to rise to the top of the sport, with the 2021 season seeing her finish in 12th spot on the Race to Costa Del Sol leaderboard, as well as compete at the Olympic Games in Tokyo.

After only getting a handicap at the age of 13, the Buenos Aires-born star has had to develop her game quickly, with a college career and time on the LET Access Series helping her to make her dream of becoming a professional golfer a reality.

Growing up on a farm in Argentina, Maggie and her family – including brother-turned-caddie Santiago – would have cows, pigs and horses to tend to, as well as schoolwork and sports to play, and it was a different ball sport that caught her eye in her early years.

She explains: “I first played at four, but I didn’t play golf that much growing up because I played so many other sports – I played polo and tennis, and played hockey the most until I was about 13. I didn’t even have a handicap or anything at that point.

“But at 13 I played a tournament in my home course and there were coaches from the Argentinian Golf Association there who were looking to build the base of the pyramid and get more children to play.

“This centre was where the best players in Argentina played, so when I got the invitation I couldn’t believe it because I didn’t think I was that good.

“I would practice golf on Wednesdays and hockey on Tuesdays and Thursdays so it was perfect, because I was on the A team for hockey, but soon after golf took up more days of the week so I realised I couldn’t do both things if I wanted to excel in one of them.

“I couldn’t believe it when I won, everybody felt that I could win it and I played better than I ever played before – and what I enjoyed the most was seeing the faces of my parents, my family and friends who were so happy for me.”

With the first championship in the bag, Simmermacher was hungry for more success, and the lure of a college degree in the United States was too good to turn down, and at the age of 17 she packed her bags and left for Virginia, to study at Old Dominion University.

The Argentinian is a self-confessed practice-addict, with the drive to get better every day keeping her at the range from dawn until dusk on some days, and with the independence and responsibility that came with leaving home at such a tender age she used all her new experiences to help her excel on the course.

“I saw it as a new opportunity and a new challenge to see how I would do there, and also thew chance to explore the world, and also helped me to improve my English as well,” she continues.

“In my team there were six players from Europe and we were all international and that helped me a lot, because we all cheered each other up if we had any problems or if we were missing home.

“I learned a lot over there – I grew up a lot and it taught me how to make my own decisions in life, which I wasn’t very good at before, but I had to do it.”

In every professional golfer’s life there will have been a crossroads, some kind of adversity to overcome to make it right the way to the very top, and Simmermacher has been no different.

After her time at Old Dominion came to an end, the Argentine failed to qualify for the LPGA Q-School, bringing an unplanned extension to life as an amateur.

But as she had done when improving her handicap through her teenage years, and just as she had done on the farm as a child, Simmermacher worked relentlessly – this time to improve her game and take it to the next level.

“Me and my coach spent a lot of time on my approach shots – because since I was a child I’ve been good at getting out of trouble, but I wasn’t the best at hitting the ball,” she recalls.

“That meant I would end up going everywhere, but then I would get the ball up and down from places that people didn’t think I could, because that’s how I learned it.

“So I spent three months trying to get better, because I knew I had to do that to have a chance to play professionally, and after about a year it really started to pay off.”

But even with her improved game, Maggie was stuck in the March of 2019. With no status and no events to play in, she had a decision to make, wait for her chance to come in America or take a leap of faith and come to Europe?

The rest, as they say, is history.

E-mail after e-mail, letter after letter, Simmermacher contacted anyone and everyone she knew – from Spain to Sweden to Switzerland – trying to get a chance to compete in tournaments and the opportunity to prove herself across the continent.

Stellar showings on the Santander Golf Tour and Swedish Golf Tour saw her credentials rise throughout the year, and after impressing with three top ten finishes on the LET Access Series, the young star claimed second spot in Q-School to earn her card for the 2020 season.

The years of hard graft, of practicing her swing on the farm, of making makeshift bunkers to practice among the cows and pigs, it had all finally paid off, and Simmermacher is keen to pay tribute to those who put their faith in her in her early days in Europe.

“I think those tours are really important, because I come from a country that doesn’t have any professional tournaments, and it’s a shame that we don’t have many professional players because no one can afford it,” she says.

“Even the flight here is expensive, and who has the money in Argentina to do that? So I appreciate the opportunities that Santander gives to players, probably more than people here because I’ve seen that we don’t have that opportunity and they are having it, so it’s giving more players a chance.

“I see people my age who didn’t have the chance to play professionally, and I talk to them nowadays and they say how they would have wanted to continue playing but they didn’t have the money to do it.

“I feel so bad about that because I’m lucky that I did have the chance, but in other countries more players have help from their federations to make sure they do it.

“So I think it’s good that in Spain, in Sweden, in all these countries they have their own tours and then they get support from their federations.”

That tenacious edge and insatiable work ethic is a Simmermacher trait that has been passed down the generations, with the family back at home tending to the family farm while Maggie keeps aiming for fairways all over the world.

But don’t be fooled into thinking she doesn’t get stuck in herself, because when the off-season comes around, she’s up and out there with the rest of them

“The farm is so beautiful and it’s almost like a golf course, everything is green and there are loads of trees, so I enjoy it a lot.

“If you saw me now on the farm you wouldn’t recognise me! I love to walk around it with my family and work.

After earning her card, Maggie finally got the chance to permanently compete on the highest stage in 2020; playing the first three events of the season until another roadblock stood in her way: this time it was COVID-19.

But the five months without a tournament seemed to be exactly what the Argentine needed, as she came back ready and refreshed for the rest of the year, with the beginner’s nerves shedded on the second half of the season.

“At the beginning I struggled with the mental part, because I assumed the players were a lot better than me, and I did let myself down a bit at the beginning.

“The time away with COVID helped me to settle and realise that I was going to get better, and I was really excited to play again. It gave me the appreciation of tournaments and playing and being able to compete.

“My mentality was better, I looked at things from a different perspective, and from there I started playing better, I was getting lower rounds and the results started coming.”

That momentum carried on into 2021, with a top ten to start the year in South Africa, before a string of impressive performances later in the year, including top three finishes at the Didriksons Skaftö Open and Lacoste Ladies Open De France.

From struggling to get a card to battling it out for LET titles, it has been some rise for Simmermacher over the past few years, and when the chance to compete at the Olympics came along, she reached out and grabbed it with both hands – and continued to blaze a trail in the Argentinian sporting world.

“The Olympic Village was great, you’re there with athletes from all over the world and the best in their sports, and I think that’s really cool,” she smiles.

“I wasn’t always the best player when I was younger but I was the only one to make it here – I know you need sacrifices, dedication and hard work, but they didn’t even get the chance to do it.

“So I’m setting the example that I can do it, and hopefully more people will see that they can do it as well.”

Golf can be a cruel sport at times, with the ball, the course, your clubs, the world all seemingly against you, but Magdalena Simmermacher is proof that if you keep trying and trying, eventually you will succeed.

And as the 2022 season starts to gather momentum, you can expect to see plenty more of the Argentinian flag at the top of leaderboards throughout the year, with that elusive first tournament victory getting within reach.

“I really want to win. I don’t know if I’m close, maybe it will happen in five years, I don’t know, but I like to put myself up there. It might happen to me some time, but I hope I do.”

After coming this far to achieve her dream, you can rest assured that she will be doing everything she can to hold that first piece of silverware aloft – and sooner rather than later.