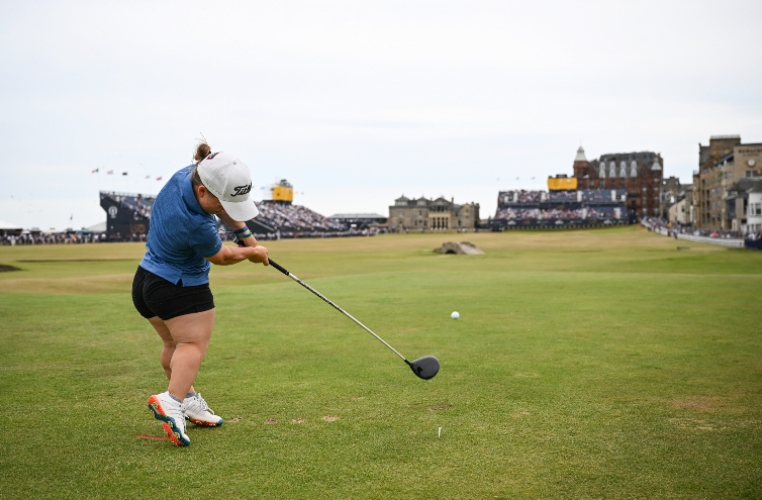 For the eight G4D players gearing up to compete for the G4D Skaftö Open this weekend, it will be a golf tournament they will never forget.

For the first time in history, the LET will stage a competition for disabled golfers alongside a tournament this week in Sweden, with four mixed gender teams ready to compete in the 36-hole format.

Two competitors that are gearing up for action are Marcus Malo and Jennifer Sraega, and the pair are eager to showcase their talents to a wider audience on Saturday and Sunday.

“It will be really exciting this week, and it will be good to show all of us impaired golfers at such a big event, so it will be great fun,” Malo said.

“Golf is great for including everyone, we can compete in our own way and find a way to hit the ball.

“It’s great to be here in this arena this week, and to be able to show everybody what we can do, it’s great for disability golf.”

For Gothenburg native Malo, golf is more than just a hobby, it is a way of life. It was the springboard he needed to get back into sport after losing his right arm as a teenager, and has given him the platform to perform ever since.

And when he isn’t on the golf course, Marcus can be found working as a scientist in a pharmaceutical company, as well as being father to four children, so is kept busy from the second he gets up to the second he sleeps at night, with practice squeezed in either side of his busy days.

From competing in national events to representing his country around the world, the sport has given him plenty of memorable experiences throughout his career, with this weekend another one to add to the list, as he teams up with England’s Aimi Bullock for the competition.

“Golf means a lot to me, I’ve been playing golf for 30 years now, I lost my arm after I had started so it helped to me to come back to life, in a way,” he continued.

“Playing golf has helped me to meet a lot of people and I’ve travelled around the world seeing many places during my journey.

“I started to play amputee competitions in the late 90s, then after a couple of years EDGA was founded – they had a more inclusive approach which meant anyone with any impairment could join the competitions, so it was a great way to include everybody.”

For Jennifer, 2022 has been something of a fairytale already, having already represented Team Europe at the Cairns Cup in London, before playing alongside Henrik Stenson in the Celebration of Champions event staged at St Andrews.

And she admits this weekend will be right up there in terms of career highs, as she looks to put on a show in her first visit to Sweden, as she teams up with local talent Felix Norrman over the weekend.

“This week will have a huge impact to see how well disabled people can play golf, and play good golf, I’m really looking forward to it.

“This is my first time in Sweden and first time to be able to play in such a special event. It’s awesome to see the players here practising and getting ready for the tournament, and I’m really excited to play.

“It’s really near the top in terms of my career, I can learn so much at every event and have new experiences, and this event will be one of the top events of my life.”

Unlike most other sports, golf can accommodate for anybody when it comes to competing, and Jennifer has harnessed her game to capitalise on her strengths around the course, namely on her short game, where she picks up countless shots with her finesse and skill.

Having started playing at a young age, she fell in love with the game almost overnight, with the driving range becoming something of a second home.

From there, she has gone on to compete around the world at the highest stage of the game, as well as capitalising on the social aspect that the game brings.

“I started playing golf when I was seven or eight, it’s a great hobby and it takes so much of my time – if I’m not going to school or university I am always playing golf, so it means a lot to me because you can play whenever you want and with whoever you want,” she said.

“If you are bad, if you are really good, you can still play golf. Especially with me, I can’t hit my ball as far as others so it makes me feel special and equal to everyone else because I can improve my short game to beat the others. I try to work on my short game the most because that’s where I can beat everyone else.

Skaftö Golf Club is the host of the G4D tournament this week, and after playing the course in practice rounds, Jennifer is well aware of the challenge it will pose.

“When you see the first hole here you think it’s easy, but when you get to the second, third and fourth it’s getting a lot closer and the fairway isn’t as huge, it’s difficult and it’s going to be interesting to see how we score.”

Malo and Sraega and their respective teams will be ready for action when the G4D Skaftö Open gets underway at 2:45pm on Saturday 27th August.