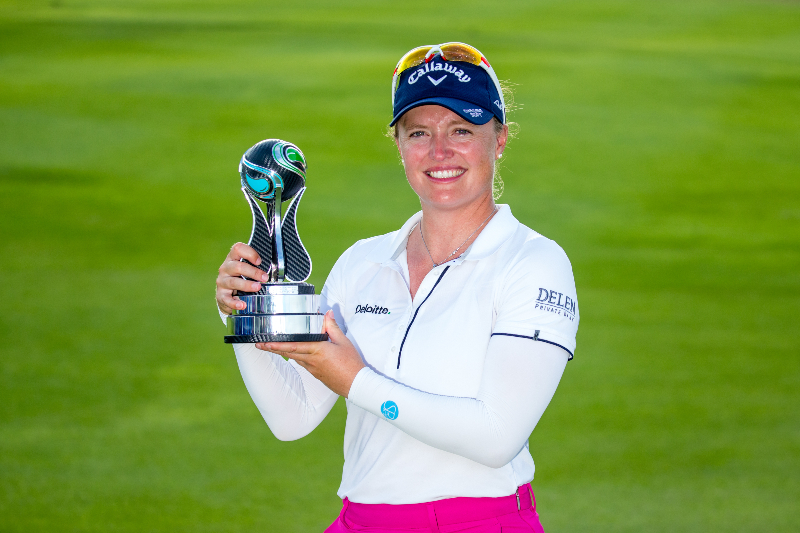 The 30-year-old went into the final day two shots behind the leader, but equalled the course record firing a bogey-free 66 (-6) to win with a total of 13-under-par.

“It feels great! I was waiting for this for a long time, so I’m very happy,” said De Roey. “I fought really hard and I’m happy I came through and got the win.”

After overnight leader Patty Tavatanakit dropped three shots on the front nine to relinquish her lead, it was De Roey and England’s Felicity Johnson who set the pace early on.

But it was on the back nine where De Roey made her mark rolling in birdies on 10, 12, 14 and 15 to seal a three-shot victory and become the third Belgian to win on the LET.

“I started quite strongly. I was hitting it quite close and made a birdie on the second. I just stayed patient and dropped in some good putts,” she continued.

“I have been working hard on my game and I was just trying to stay patient for the win. I was really hoping to get this win last year, so I’m really happy I have got it now.”

Sweden’s Johanna Gustavsson continued her excellent form in 2022 with another second-place finish as she carded a bogey-free 68 (-4) to finish on 10-under-par.

“I’m very happy. It’s been a good week,” said the Swede, who has had three second places in 2022. “I’ve had fun with the girls in the Team event, and today was very fun.

“I think I’m pleased with how solid my game is. It is quite straightforward and obviously there were no bogeys today which is always nice.

“The putting has been decent, yesterday I struggled a little bit, but I got through it, and I holed a lot of putts in the middle of the round. Today that was my only concern, but I thought I got through it pretty nicely and I’m proud of that.”

Scotland’s Kylie Henry and Thailand’s Tavatanakit finished in a tie for third place with a total of eight-under-par.

The Scot, who fractured her elbow last October and was out for four months, produced a final round of 69 (-3) which included six birdies and three bogeys.

“I played really solid today,” said Henry. “I felt like I could really trust my swing all week, so I was really happy with my long game and even I putted mostly good.

“I missed a few out there, but I guess that’s going to happen sometimes. On the whole I’m absolutely delighted. This is only my third tournament back after breaking my elbow. I’m delighted.”

Three players were in a share of fifth place on seven-under-par including the 2022 Madrid Ladies Open champion Ana Peláez, as well as Thailand’s Ariya Jutanugarn and England’s Johnson.

In the 2022 Race to Costa del Sol, Sweden’s Maja Stark still leads with 1457.50 points while Gustavsson’s second place has moved her up to second and she now has 1134 points.

De Roey’s victory has seen her climb up the rankings to third place and she has 1027 points to her name, while Simmermacher is fourth with 910.50 and Lee-Anne Pace is fifth with 781.92.

Winners from this season Linn Grant, Meghan MacLaren and Peláez sit sixth, seventh, and eight with Michele Thomson in ninth and Linnea Ström rounds off the top ten.