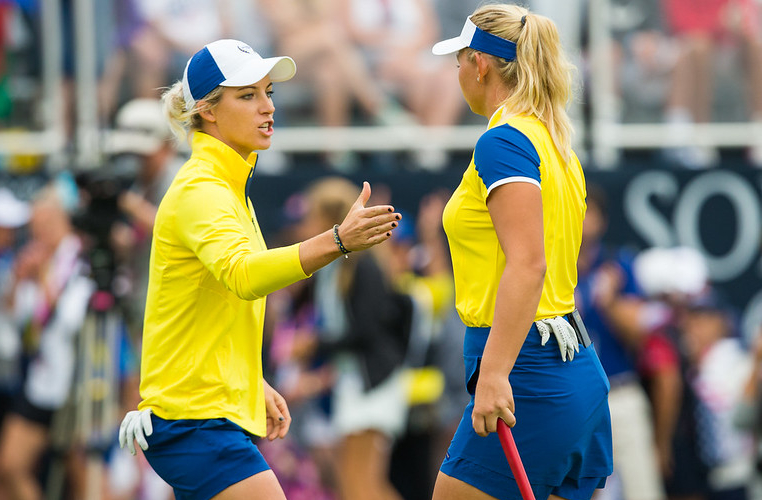 “I do believe that there will be three of us who will be leaders. I think that’s going to be me, Carlota (Ciganda) and Anna (Nordqvist) and that’s because we’ve played in more (Solheim Cups) than most.”

Those were among the many musings of Mel Reid, who arrived in Toledo late on Monday evening after spending the day in New Jersey at a media function for the ShopRite Classic presented by Acer. It was her first such appearance as a defending champion, having captured her maiden victory at the Seaview, Bay Course last October. But after talking to a small group of media about her game, Reid quickly turned the discussion to the Solheim Cup, where her magnetism and natural leadership is already on display.

If you are a fan of the biannual matches, you likely remember Reid in Germany in 2015 where she went undefeated and where, had the Europeans held on to win, she would have been heralded as the hero of the matches. Fiery, intense, confident and always engaging, Reid fills up every room she enters.

“I’ll take on that leadership role because I feel like I’m more vocal than most,” Reid said. “I feel like my role on the team is to be that leader. I feel like one of our assets as a European team is that we are very good at bonding. For us to have any chance of beating a strong American team – and they are incredibly strong, but don’t get me wrong, we have the strongest team we could have – to beat that strong American team on American soil, I think we have to bond. I think that will be my job this week, to make those girls who might not be used to opening up in social settings feel really special.

“I’m proud to be that leader. It’s something quite natural for me.”

Despite being the emotional star of the losing team in Germany, Reid believes that she first assumed a leadership role at the Des Moines Solheim Cup in 2017. “I felt my role was a bit different there,” she said. “That’s when I noticed that some of the rookies on the team and some of the younger players were coming up to me for advice. And then being an assistant captain (in 2019 at Gleneagles in Scotland) clarified it for me.

“I enjoy that role. I enjoy being that person who is trying to make people feel comfortable. I had that person when I first started. In 2011, I had Laura (Davies) and Karen Stupples who made me feel extremely comfortable. Your eyes are quite wide when you’re coming (to the Solheim Cup) for the first time. (The rookies) will not have felt the nerves like they will on the first tee at a Solheim Cup. So, it’s about making them feel comfortable. That comes quite naturally to me.”

Being an assistant to Catriona Matthew in 2019 clarified a lot of things for Reid. “What was cool about it was seeing all the hard work that goes into it,” she said. “Solheim is such a long week. Honestly, it’s one of the least fun weeks we have as players before that first match tees off because we have so many commitments. Photo shoots, gala dinners, it’s a really long week. Being an assistant captain, I realized how much effort goes into making it an easy week for the players. So, it gave me a different perspective.

“Obviously I would much rather be playing and be one of the 12 women everyone is trying to keep happy than be stressing over trying to keep 12 other women happy.”

Reid also loves match play, a format that suits her aggressive nature. Fans might remember the 2016 International Crown where Reid took on Haru Nomura and Mika Miyazato of Japan by herself in a fourball match after Charley Hull took ill. While Japan won the match 1-up, the fact that Reid, flying solo, took Japan’s two best players to the 18th hole burnished the Englishwoman’s image as a match-play maven.

“I love beating people, honestly,” Reid said. “And you don’t have to be playing great (to win). You’re like, okay, if I can just get this one (hole) back, I’ll be alright. Momentum can switch so quickly in match play. We saw that in Las Vegas (at the Bank of Hope Match-Play hosted by Shadow Creek). I was three down with five to play to Hannah Green, one of the best players in the world and I managed to turn that match around. You can never take your foot off the gas if you’re leading (a match) and you can’t afford to take your foot off the gas if you’re losing. It’s one of those formats that I wish we played more often.

“I play a lot of match play at home,” she said. “When I’m playing against the boys at home, I feel like I’m constantly playing match play. It’s just something that gets my blood going, something that I enjoy. And I love the Solheim Cup because you’re fighting on every single shot for every single point. And you’re doing it, not only for yourself but for your team.”

Reid will go out of her way to get to know a couple of the players early. “I’ve never really spoken to Matilda Castren,” she said. “I’m kind of intrigued. I’ve paid attention to her in the last few months and how she won in San Francisco (at the Mediheal Championship) was impressive. She is someone I’m looking forward to getting to know and I hope to make her feel comfortable as early as possible. I will sit with her the first night of dinner and welcome her because I feel as though she’s going to be one of our strongest players.

“And I’ve spoken to Leona (Maguire) a little bit. She’s quiet by nature. She’ll be someone, the first couple of nights, that I’ll try to make feel comfortable. But the rest of the team I know really well.”

They will all know Reid in the end. Natural-born leaders are like that. They command your attention. And they earn your respect. Win or lose, Mel Reid checks every leadership box.