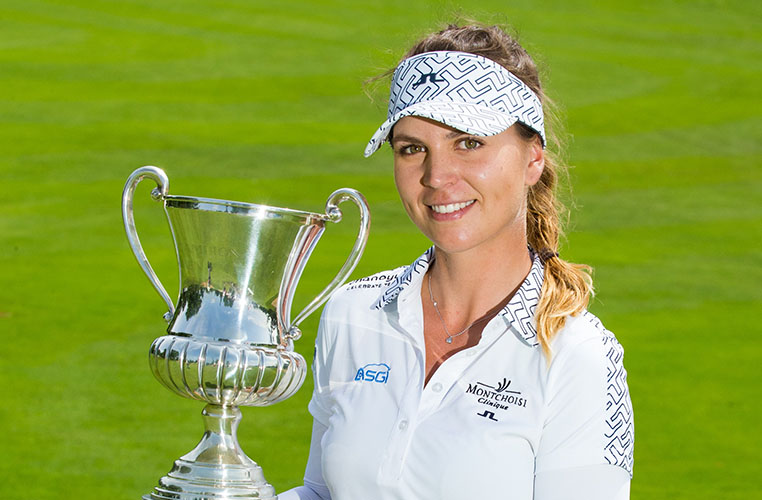 Morgane Metraux of Switzerland eagled the first extra hole in a three-way play-off to win the Ladies Italian Open presented by Regione Piemonte and become a first-time winner on the Ladies European Tour.

Metraux birdied three of the last four holes at Golf Club Margara and needed a birdie on the par-5 18th hole to win outright in regulation play, but her putt from six feet lipped out and she tied on 10-under-par 206 with England’s Meghan MacLaren and Italian amateur Alessandra Fanali.

After MacLaren and Fanali both made two-putt birdies in front of a large gallery, Metraux then holed a 20 foot eagle putt to earn the victory, before embracing her father, Olivier, who was acting as her caddie.

“It’s hard to realise right now, but I’m very, very happy. It’s great to win a play-off,” said the 25-year from Lausanne, whose older sister, Kim, finished in a tie for seventh position and whose mother, Valerie, was also watching from outside the ropes.

“I had a bit of adrenaline on the second shot, because I wasn’t planning to hit it all the way up to the top tier. I hit a really good shot and as soon as it came off the face, I knew it was somewhere on the green and that’s what I wanted. When I saw it had come up, it was a little bonus.

“I had a good read from my first putt in regulation, so I knew what the putt was doing and put a good stroke on it and it went in.

“I couldn’t have dreamt it better, to be in Italy, a country that I love and my mum’s Italian, so I have a bit of a link to it. It couldn’t be better.”

Following her tie for third in the Mithra Belgian Ladies Open last week, Metraux moved up to 10th on the Race to Costa del Sol Ranking, while MacLaren, who tied for second, moved up to sixth place.

For Fanali, a member of the European PING Junior Solheim Cup team in 2017, who just finished her golf scholarship at Arizona State University, the experience confirmed her desire to turn professional.

“I want this. This was my plan and I think I’m going to stick to my plan,” she said.

“Today was amazing. It was similar to the last two days but I dropped a few more putts. I missed a couple. I was so excited and happy about it, I can’t complain. I made a pretty good first putt in the play-off, so it was an easy birdie for me, but she (Morgane) made a great eagle putt.

“When I was riding in the golf cart in the play-off, it was so weird, I couldn’t believe it. I was playing college golf last week and thinking about turning pro or not. This week was very good and I get in next week, so if I’m going to play, I might turn pro, I don’t know. I guess it’s going to change.”

Another Italian amateur, Carolina Melgrati, tied for fourth place with South African Casandra Alexander, while Lee-Anne Pace, also of South Africa, who held a three-stroke lead after she holed out for eagle on the fourth hole, had to settle for sixth place.

The third Italian player in the top 10 was Roberta Liti, who shared seventh with Kim Metraux and Nuria Iturrioz from Spain.

The LET now moves to Sweden for the Volvo Car Scandinavian Mixed Hosted by Henrik and Annika, a mixed gender event with the DP World Tour.