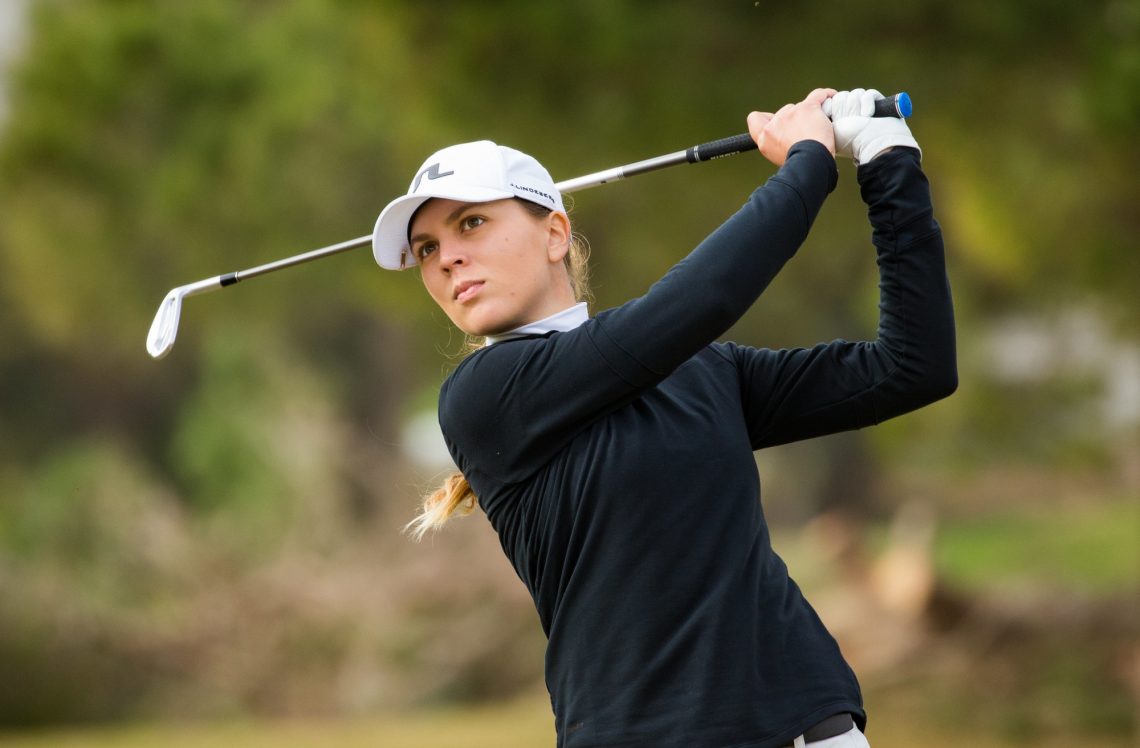 Day one of Ladies European Tour Qualifying School got underway on the North and South Courses at La Manga Club on Wednesday, in somewhat benign conditions in comparison to what had been experienced over the previous couple of days, with Storm Gloria causing destruction at the resort in Cartagena, Spain.

The club’s greenkeepers have been working overtime to prepare the course after 150 trees were ripped out across the resort’s golf courses during the storm. They have done an incredible job and play got underway in excellent conditions for the first round of final stage qualifying for the 2020 LET season.

After taking a year out due to a shoulder injury, Switzerland’s Morgane Metraux made the most of the improved conditions to card an opening round three-under-par 68 on the North Course and take the overnight clubhouse lead. After signing for the round of the day, Morgane reflected: “I have had a full year off until now, because of my injury. Firstly, to be able to play is really amazing and to play this well is a really, really good feeling for me.

“I was lucky that I played in the Pre-Qualifier, as I knew the courses so I didn’t have to practice in the storm over the last few days when it’s been raining a lot. The courses have softened up since last week but definitely drain very well compared to the amount of rain that we have had.

“I holed a few long putts which was a big bonus today. My putting was really good and my iron play was solid. La Manga Club is great. I wasn’t actually planning on playing due to my injury and coming here I wasn’t expecting too much in terms of my golf. The resort is really good and if you compare it with the conditions we have had, the place is tremendous.”

players within shots of the lead after day 1 of final stage qualifying for the 2020 LET season @LaMangaClub #LETTourSchool184:37 PM – Jan 22, 2020Twitter Ads info and privacySee Ladies European Tour’s other Tweets

Alison Muirhead, who won the Pre-Qualifier last week, continued her excellent form carding an opening round two-under-par 69 on the North Course. The 21-year-old from Scotland commented: “I am pretty pleased with my start. I played really solid and hit a lot of fairways and greens. I feel there are plenty of birdie opportunities out there but if the wind is like this, it is definitely going to make it tough. I’m feeling excited about the next four days.”

Frida Gustafsson Spang was very happy with an opening round two-under-par 69 and also was grateful for the work that the greenkeepers have done. The Swedish star said: “I’m very happy. Obviously I had a lot of nerves as I haven’t competed for a while, so I was very happy that I could keep everything very solid. I tried to play smart and strategic golf, especially with the wind.

“The greenkeepers have done an amazing job. I have been talking about the storm with friends as we were expecting wet shoes but my shoes are still super dry! The course handles the rain very well but we also have had many trees come down. They have cleared everything, so they must have been working so hard and we are very happy for everything that they have done to make the course super good. La Manga Club is great. It is so nice to have everything in one spot. We have beautiful courses, everything is easily accessible and there are great facilities.”

Sweden’s My Leander joined Frida and Alison on two-under-par and reflected: “It was a fun round today. I had three early birdies on the front nine which helped. I managed to hit a lot of shots close to the pins today. It’s been raining for two days but the courses are holding up really well. La Manga Club is so beautiful. It’s nice to see some sunshine today and it’s probably going to get even better tomorrow.”

Swaziland’s Nobuhle Dlamini shot the best round of the day on the South Course, posting a two-under-par 71. Making up a seven way share for second position on two-under-par are Germany’s Leonie Harm, France Emilie Piquot and Spain’s Marta Martin.