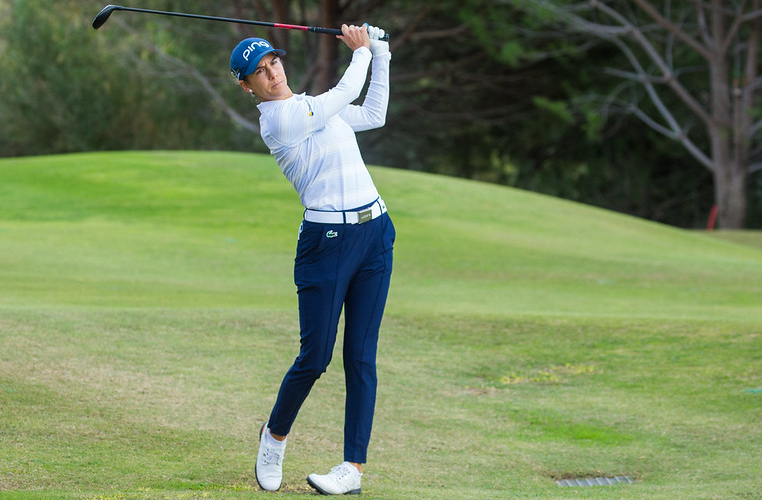 At the end of the 2021 season Azahara Muñoz stepped away from the game of golf for a few months and in February gave birth to her first child – her son Lucas.

The Spaniard returned to the LPGA Tour at the end of the summer making her first appearance at the Dana Open presented by Marathon and has played in a few tournaments since then.

This week Muñoz returns to her homeland to play at Alferini Golf in the season-ending Andalucía Costa del Sol Open de España – a tournament she won in 2016 and 2017.

And having slowly eased herself back into competition, the Solheim Cup star is pleased with how she’s progressing and with where her game is at.

“I’m happy with where I am,” she said. “I’ve been playing better; I had a break after he was born and before that I was pregnant when I was playing. I think I just need a few more rounds.

“Lucas is nine months now and that’s make it a little easier and I have a little more time. By the time we start next year he’s going to be one and hopefully he’ll be sleeping better, and I think it’s only going to get better for me.

“I’m very pleased. I don’t have much time to practice, and I don’t have the time I would maybe like. I’ve made some swings changes because I never really had time before to do that and I had some, so I’m going to practice on those a bit more and be a bit more comfortable for next year.”

Last year Muñoz made it clear that a goal of hers was to be able to compete for Team Europe in the 2023 Solheim Cup, which is taking place at Finca Cortesin.

The Spaniard knows she is still in the early stages of her journey back to golf and realises the challenge she has ahead of her, but is more than ready to meet it.

“I haven’t thought exactly about what I need to do. There’s only two or three spots that could be for me, I can only control what I can do but it is going to be tough and going to require me to play some pretty awesome golf.”