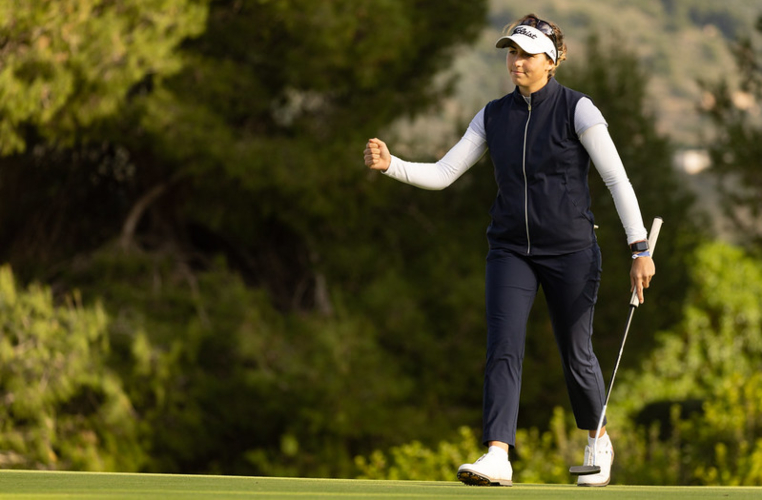 Nastasia Nadaud ended her amateur career in style in December finishing in third place at LET Q-School and securing her spot on the Ladies European Tour in 2023.

The French player was exempt into the Final Stage at La Manga Club thanks to finishing 16th on the LET Access Series Order of Merit – despite only playing five events.

Nadaud visited the host of LET Q-School after the LETAS season had finished to scout out the courses and that trip soon paid dividends.

With rounds of 68, 67, 66, 75 and 71 on the North and South courses, the 18-year-old sealed third spot on the leaderboard on 14-under-par clinching her LET card for this season and turned professional after the tournament.

Speaking at the time, the teenager said: “I don’t think I can put into words how I’m feeling! I can’t believe it’s over; I’m still thinking that there’s a sixth-round tomorrow. I feel really great, and it’s done, finally.

“This is the perfect end to my amateur career. If someone would have told me that I would be top three at Q-School, I would have already turned pro! It’s really nice.”

Nadaud had an excellent 2022 on the golf course being part of the winning French team at the European Girls’ Team Championship and winning on LETAS claiming the Goteborg Open title.

With a record-breaking LET schedule to look forward to this coming year, with the biggest prize money in the organisation’s 45-year history, Nadaud is excited to begin her professional journey.

She explained: “I want to play as many tournaments as I can and enjoy my time in my first year as a professional. I’ll have some rest over winter and then we’ll have a great year.

I would say it’s Mexican.

Everyone calls me Nas.

There are a lot of great courses out there. I didn’t play that many courses outside of Europe. In France, there is a wonderful golf course in Paris called Morfontaine – it’s really beautiful, it’s very nice. It might be a bit patriotic, but that’s the truth!

I would say driver all the way. I’m hitting it all the way, so yeah, my driver.

I would say Nelly Korda because she is so inspiring with her long game and the way she just manages to hide her emotions. She’s so calm on the course.