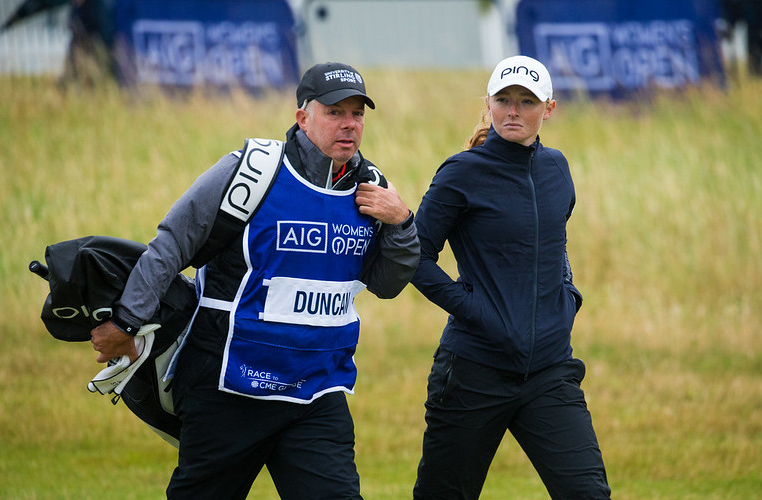 It was an early start for Scotland’s Louise Duncan, who teed off in the first group of the day at the AIG Women’s Open, but a good one as she sits in a share of third place after 18 holes.

A stellar showing at Carnoustie last year saw the now 22-year-old finish in T10 to secure her place in this year’s Championship and she earned the Smyth Salver.

The one part of her game that has been a challenge for Duncan recently has been her driving, but a new head seems to have solved those issues.

And having joined the professional ranks last week, the Scot tried to stay relaxed this morning and patience was the key to her round of 67 (-4).

“It was worth the 4.30 alarm! I’m glad it’s over with and I played well,” she said. “I didn’t take it too seriously this morning, I just went out and enjoyed my warmup. It was a relaxed morning considering how early it was and I think that’s what helped me shoot that score.

Duncan made three birdies and two bogeys on her front nine to make the turn in one-under, but another birdie on 11 and an eagle on 17 saw the Scottish player climb up the leaderboard.

She continued: “Last year was in the back of my mind. Obviously, I had a good run on the back nine last year. It’s a tough back nine here.

“I thought level par was going to be a really good score. I knew there was a chance on 17, so if I did make a bogey, I wasn’t going to be too upset and I missed a wee put on 15 for birdie. I tried not to let that affect me and it didn’t, really. That was a decent back nine.”

And getting to spend the day with Matthew is something the 22-year-old cherished. She added: “She’s really inspiring to all Scottish girls rising through the ranks, so it was really good to play with her and quite calming. There’s something about playing with Scottish people in big events. She told me to just enjoy it and work hard and see where the game takes you. She’s proved that it’s not impossible for all of us coming up.”