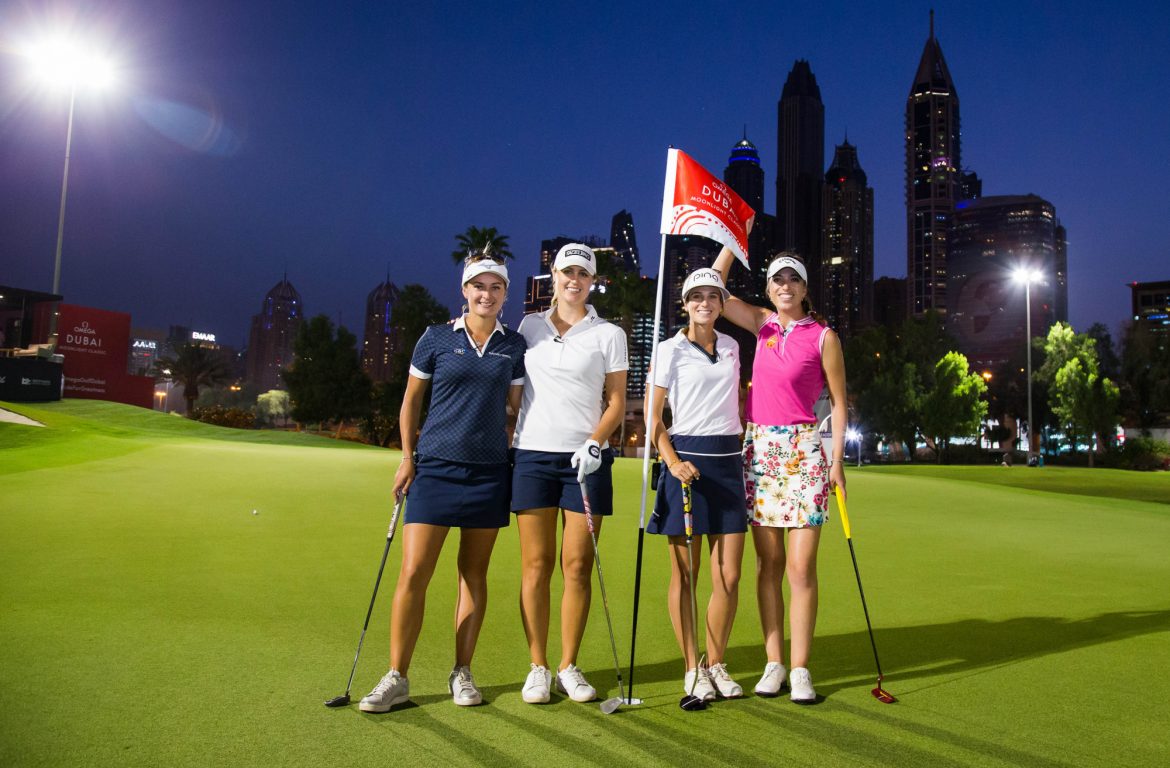 A star-studded cast are aiming for the new Omega Dubai Moonlight Classic title. We hear from the players who are welcoming a new floodlight dawn for the LET event.

Lights, camera… action! The Omega Dubai Moonlight Classic gets under way tomorrow over the Faldo Course at Emirates Golf Club, which will host the world’s first professional day-night golf tournament.

The field of 56 professionals had the chance to practise under the lights on Monday and are ready to make history  in the 54-hole tournament.

Each of the professionals will play at least nine holes of one of their opening two rounds under Faldo’s powerful new eco-friendly LED floodlights. It will be  fascinating innovation within the battle at Emirates Golf Club in what is an exciting new chapter for Dubai golf and the Ladies European Tour.

Cheyenne Woods, who has returned to Dubai to compete for her second LET title, said: “It will be a very new challenge but I’m excited. I think it’s a great event for golf. I think these formats keep the fans interested and it’s good for us too, just having a different experience playing.

“I feel like I’m playing really well, just putting the pieces together. I feel like mentally, physically, I just feel like I’m in a really good place to play some really great golf so the more I play the closer I think I’ll get to where I want to be.”

Meghan MacLaren, who is looking for her third LET title, has welcomed the change of tack. She said: “Any time that golf tries to innovate it creates a bit of a buzz, which I think is exactly what the game needs. Hopefully the Omega Dubai Moonlight Classic means a few more people will be paying attention just to see something different happening. The playing level is and always will be there, so it’s about forcing people to sit up and take notice.

“The idea of playing under floodlights is pretty cool. I’ve always enjoyed going to watch evening football matches so hopefully golf will be the same.”

For Amy Boulden, who has her heart set on winning a first LET title in the vibrant metropolis, winning against the backdrop of the glittering Dubai Marina would be extra special.

She said: “It’s really exciting. I’ve played night golf before, in Dubai and in Abu Dhabi, but not in a tournament.

“I think we’ll all have fun playing under the lights and I think Dubai is the perfect place to do it. It’s going to be a great test and I think everybody will have great fun.

“When I come to Dubai, it feels like home to me. The greens are the best we play on, in Dubai, so it’s always nice to come to play on perfectly conditioned greens.”

Camilla Lennarth, who will be looking for her second win and her first in five years, added: “I’m excited too. I haven’t played that much night golf at all. It will be a first for me, but the lights are really bright, so I think it will be a fair test. I think it’s good to try new concepts and see what works and what captures a different crowd.”

Another young Spanish talent, Silvia Bañon added: “It’s the first time playing under lights so it’s an honour to be here. It’s an incredible environment and we are really happy and excited to play. It’s my first time in Dubai and it’s really different. I was saying to Noemi, I’ve only seen these buildings in pictures.”

The Omega Dubai Moonlight Classic will be played from Wednesday to Friday and the move of the LET’s revered stop in the emirate from December to May will showcase Dubai’s extended golf season, whilst at the same time profiling the stunning venue which will be a fitting destination to showcase the incredible golfers who play on the LET.

The 56 professionals will play the final round on their own