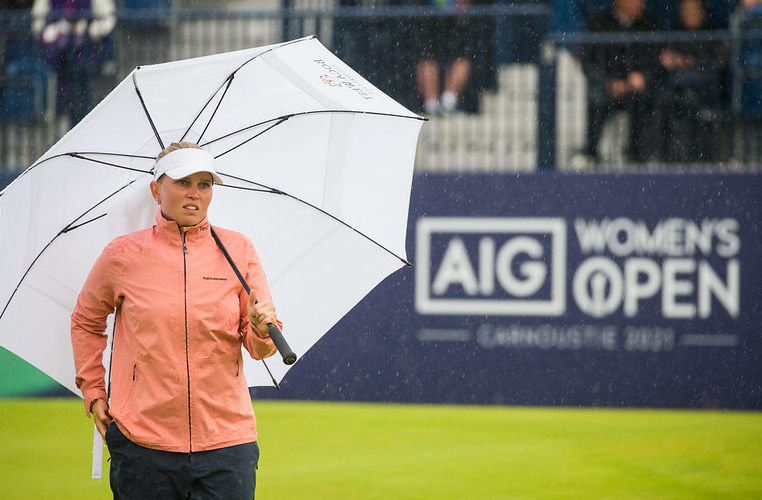 Sweden’s Anna Nordqvist produced the best round of the week – a sensational 65 – to be a co-leader heading into the final day at the AIG Women’s Open.

On a day when the weather conditions took a turn for the worse, it was the Swedish star who stood out from the pack carding a bogey-free round of 65 (-7).

The two-time Major winner rolled in her first birdie on the third hole before making three more consecutively on six, seven and eight to make the turn in 32.

Nordqvist added three further birdies on the back nine to climb up the leaderboard and sit one nine-under-par with one round to play.

“I feel like I have been playing really solid this week and last week at the Scottish I hit the ball really well. I think it’s been coming together for a while, but just very steady. I hit a lot of fairways and a lot of greens today. It gave me a lot of good chances and that’s going to be the difference,” said the six-time Solheim Cup player.

“I’m very happy with my round and feel like I’ve been staying patient this week and just letting it come to me instead of trying to force it. All I can really do is try to shoot another low round and see where it puts me. I don’t have many expectations right now. I’m just trying to focus on what I can control and just enjoy playing golf.”

Nanna Koerstz Madsen continued her consistent form in the tournament after posting rounds of 70 and 69 on the first two days, the Dane followed that with a 68 in the third round.

The 26-year-old rolled in three birdies on the front nine to make the turn in 33, before dropping a shot on the tenth.

An eagle on the 12th ensured the Danish golfer drew level with Nordqvist at the top of the leaderboard on nine-under-par.

“I’m happy with the round. I played quite steady out there. I hit a lot of greens. I would have liked somewhere been closer to the pin but also made some good putts. I have just got to try and clam down my nerves and remember that I’m playing good golf right now, so that’s what I’m going to try and focus on,” said Koerstz Madsen.

In outright third place is American Lizette Salas, who finished second at the 2019 edition of the tournament, after she carded a round of 70 to be eight-under-par.

Salas said: “It wasn’t like the first two days. I think at some point you had to mentally prepare for conditions like this. I think the wet conditions really kind of settled everything and got off to a little shaky start and after five, I think the momentum switched and I was able to hit really good shots coming down the stretch to give myself good looks.”

Four players are two shots adrift of the leaders on seven-under-par heading into the final day including Finland’s Sanna Nuutinen, who sits third on the 2021 Race to Costa del Sol.

A round of 68 propelled the Finn up the leaderboard and she stands in good stead ahead of the final day. She is joined by Scottish amateur Louise Duncan, Sweden’s Madelene Sagstrom and American Lexi Thompson.

Seven players sit in a tie for eighth place on six-under-par including England’s Georgia Hall, who was the co-leader at the halfway point.