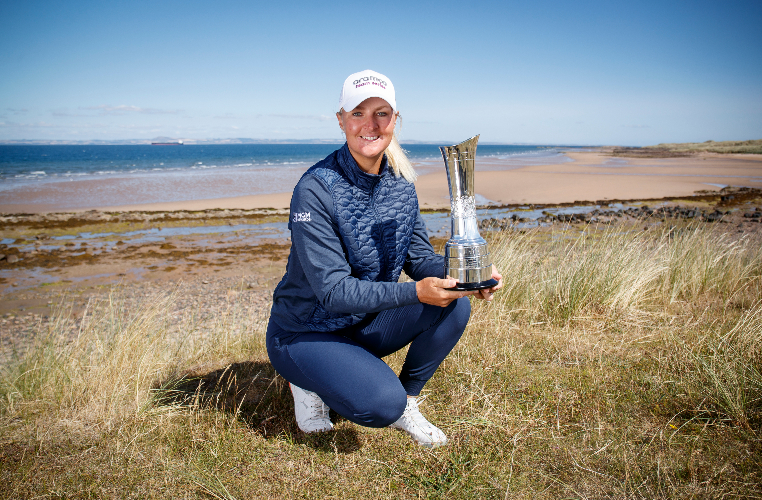 Last year’s AIG Women’s Open was a dream came true for Anna Nordqvist as she won her third Major title securing a one-shot victory at Carnoustie.

With her husband Kevin from just down the road, everything came together, and the Swede clinched the title she had dreamed about since she was little.

“It’s obviously a very special honour,” said the seven-time Solheim Cup player. “If someone would have said when I as a young girl that I would one day win the AIG Women’s Open, I probably would have told them they were crazy.

“It’s probably the biggest childhood dream I’ve ever had, especially being from Europe. It is very special. I’m going to embrace the opportunity teeing up on the first hole being announced as the defending champion.

“It’s been a huge honour having the trophy and getting to share it with my friends and family for the last year. Half of the time I’m probably still pinching myself that I went through to win because for me, I don’t think it could have been a more special place than Carnoustie.”

It is an historic week with Muirfield hosting the Championship for the first time – a golf course which is regularly rated among the top courses in the British Isles and top 20 in the world.

And Nordqvist, who is number 24 on the Rolex Women’s World Golf Rankings, managed to play the back nine on Monday.

“It’s going to be a challenge, but I think it’s an amazing venue,” said the 2022 Big Green Egg champion. “I’ve never been here before.

“I think it’s going to be a true Women’s Open with the conditions. So far, I’m really impressed with the venue and all the setup, and it just really feels like a Major with the atmosphere and everything.

“I kind of like that challenge, having to challenge some bunkers or having to maybe aim in the thick rough and letting the wind play a part of it. I love this kind of game and I really embrace every time I come back to Scotland and am getting to play links golf.”

The five-time LET winner will begin the defence of her title at 12.49pm local time alongside Thailand’s Patty Tavatanakit and Japan’s Yuka Saso.

A couple of weeks ago at the fourth Major of the year, Nordqvist had the chance to meet former tennis player Ana Ivanovic – the 2008 French Open winner.

And off the back of the Lionesses winning Euro 2022, which saw record attendances across all stages of the tournament, Nordqvist relishes the opportunity to meet and watch other female athletes.

She added: “It’s just exciting to see that I think women’s sport over the world is getting more attention. I followed quite a bit until we [Sweden] lost against England in the semi-finals. It’s awesome.

“I love following other sports. I got to meet Ana Ivanovic for the first time at Evian a couple weeks ago. I’ve always been a huge fan, so that was a huge moment, meeting her as a person. She had just picked up golf and she tried to refer golf and how it was compared to tennis.

“Every time I get to meet another female athlete, I think it’s an amazing opportunity because I really admire and I understand the hard work that’s being put on behind the scenes. It was great to see a great turnout for the football no matter who the champion was.”