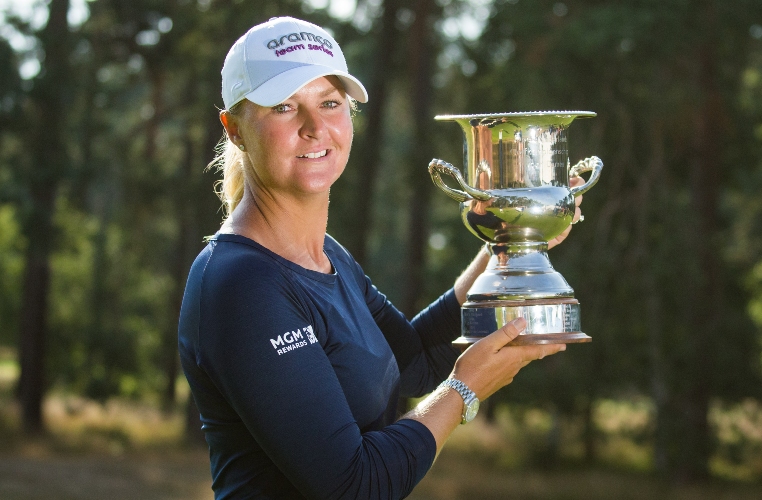 Anna Nordqvist is the 2022 Big Green Egg Open champion after a final round score of 72 saw the Swede take a one-shot victory in The Netherlands on Sunday.

The three-time Major champion warmed up for next week’s Amundi Evian Championship in the perfect way at Rosendaelsche Golf Club, with the win her first individual success on the Ladies European Tour outside of the Majors.

Having gone into the final round with a slender one shot advantage, Nordqvist had to hold off the challenge from a number of players throughout the day to get her hands on the trophy.

A birdie on the 17th hole ultimately proved the difference for the Swede, who had to stay patient to seal the win on a tough day of scoring, as she finished the week on seven-under par.

“It feels really good, I’m proud. It was a bit of a battle out there today, I played really well in the beginning then lost focus and rhythm around the turn. But I’m proud of myself for fighting through the week,” she said.

“The beginning of this week was a bit of a struggle, then I played so well yesterday in a bit of a breeze, I’ve done a lot of good things this week and it’s nice to be back competing again.”

The Swedish star started the day with a steady front nine, picking up a shot on the par-five fourth, before dropping a shot on the ninth to make the turn in 36.

Another bogey on the tenth saw things tighten up at the top, with Nordqvist locked on -6  alongside Vani Kapoor and Sarah Schober, with a nail-biting final stretch in store.

A birdie on the 13th saw the Solheim Cup star move herself back into the ascendency, only for a dropped shot to see her fall back to -6 alongside Schober once again, with Sophie Witt and Kapoor a shot back with three to play.

But a birdie on the penultimate hole of the tournament was to prove the difference for the Swede, who warmed up for next week’s Amundi Evian Championship in the perfect manner with victory in the Netherlands.

She continued: “I knew were tied on -6 around the 13th hole, I made birdie on 13 and had a great putt on 14. I got unlucky on 15 I found the fairway then it bounced straight right and I think it found the thickest part of the golf course just off the fairway, so that was unfortunate to make bogey.

“I made a great putt on 16 and I thought it was in, then I had a great pitch shot on 17 for birdie. It’s given me a lot confidence heading into next week.”

A level-par round of 72 was enough for Schober to secure a career-best finish on the LET in second, as she finished the week on six-under par.

Three bogeys and three birdies on the front nine saw the Austrian come out in 36, before fighting back from another dropped shot on the tenth with a birdie on 13 to earn herself a runner-up position.

Kapoor could be understood for having nerves as she stood on the first tee ahead of Sunday’s play, as she featured in the final group of an LET event for the first time, with none other than three-time Major champion Nordqvist for company throughout the day.

And it could have been those early jitters that forced a bogey on the second, before she earned a shot back with a birdie on the eighth.

Another dropped shot on the 14th saw her fall a shot back behind the leading pair once again, with a finish of T3 the best of her career, just as it was for Sophie Witt who also finished on -5 for the week.

The German shot the best round of her fledgling LET career on the final day in the Netherlands, with eight birdies on the card in a score of 67 (-5), which saw her shoot up the leaderboard.

“My putting was great today, my irons and wedges were fine and then I holed the putts. My wedges were good, my putts were better, and I kept my drives mainly straight, which is key to this course because it’s tight,” Witt said.

“It’s only one hour from my home so I slept at my house everyday which is a bonus, I wasn’t feeling great this week so wasn’t sure if I was going to compete and rest but I think it is good that I competed here.

“I had no expectations coming into this week, so I’m glad that I played well.”

Witt and Kapoor shared third spot with Nuria Iturrioz, who registered three birdies and three bogeys to go round in level-par on Sunday, leaving her two shots off the lead – just as she had started the day.

Momoka Kobori’s strong performances in Europe continued with a sixth-placed finish on -4, with a final round score of 72 enough to keep the New Zealander in the top ten, while Whitney Hillier finished in standalone seventh on -3 after a final round 73 (+1).

Five players finished in a tie for eighth on -2, with Zhen Bontan the highest Dutch finisher on home soil, alongside Anais Meyssonnier of France, Virginia Elena Carta of Italy, and English duo Lily May Humphreys and Liz Young.

Victory for Nordqvist moves her up to 21st in the Race to Costa Del Sol on 603.33 points, with Hillier causing the only movement within the top ten, as she jumps into eighth place above Tiia Koivisto on a score of 1003.53.