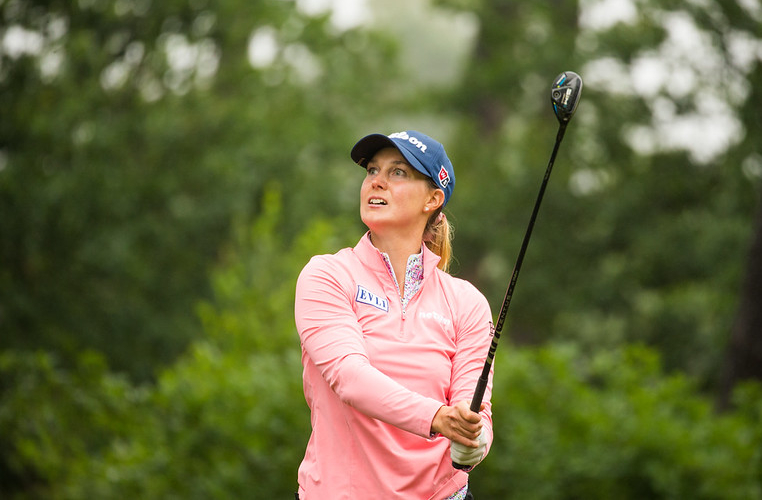 Finland’s Sanna Nuutinen shot a second round of 68 to claim a share of the lead alongside Australia’s Stephanie Kyriacou at the halfway stage of the Big Green Egg Open.

After an opening round of 70, Nuutinen followed that up with a round of four-under-par (68) to head into the weekend tied at the top of the leaderboard.

The Finn began her round with a dropped shot on the second hole, but she recovered with back-to-back birdies and made the turn in 35.

Nuutinen, who is currently fifth in the 2021 Race to Costa del Sol, rolled in three more birdies on the back nine to draw level with Kyriacou.

“It was just easy. I hit a lot of fairways and a lot of greens, so it was a stress-free round for me today. It was a bit of a struggle with the umbrella and trolley,” she explained. “My caddie unfortunately had to withdraw at the last minute due to an injury. I’m trying to manage it myself this week. It looks like it is going well.

“I was supposed to have this week off because there is a long stretch of tournaments coming up with Majors and the Olympic Games. There is not really time for a week at home. I am here but I have this rule where I am only allowed to practice for 50 minutes after my round. I am trying to focus on recovery and resting this week.”

Kyriacou held a two-shot advantage overnight and battled to a round of 72 to maintain a share of the lead after two rounds.

The 2020 LET Rookie of the Year had four birdies and four bogeys on her card during the wet conditions at Rosendaelsche Golf Club.

“I feel okay, I feel like I could have played a lot better but I’m sure everyone can say that. I did miss a couple of small putts, but then I holed a couple of long ones to make up for it. It was really steady golf,” the 20-year-old said.

“It was raining a little bit more this morning than it was last night. The greens were a little bit slow, and I think I struggled there. If it is going to be good weather, then I should be okay. There are still two more rounds and especially on this course, with it being so tight anything can happen in 36 holes of golf.”

Thailand’s Atthaya Thitikul, who won last week’s Tipsport Czech Ladies Open, produced another solid day shooting her second round of 70 to be two strokes behind the leaders.

Four players sit one shot further back on three-under-par and are T4 for the tournament including Finland’s Elina Nummenpaa, Germany’s Olivia Cowan, Denmark’s Linette Littau Durr Holmslykke and Scotland’s Michele Thomson, while the cut fell at +5 with 65 players making it to the weekend.