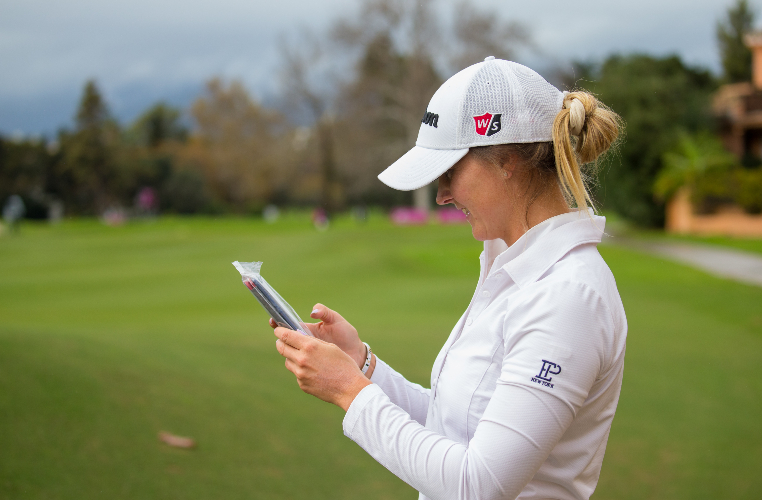 Finland’s Sanna Nuutinen continued to show why she is one of the best players still in search of her maiden LET title, firing an opening round of 67 (-5) to lead by one shot from Scotland’s Kelsey Macdonald at the rain-affected Andalucia Costa Del Sol Open De Espana.

Playing in the morning wave at Real Club De Golf Guadalmina, the hard-working Finn endured the tough morning conditions but was at least able to finish, with 16 groups unable to complete their opening round as heavy rain halted play at 3.58pm (local time).

Setting out in near darkness and heavy morning showers at 8.40am from the iconic par three 10th hole, Nuutinen opened with a par and a birdie before a double bogey at the 3rd temporarily set her back.

As the sun began to break through the clouds on the Costa del Sol coastline from around 10.00am, the 28-year-old bounced back – just as she has done for most the season. Steadying the ship with a run of pars before back-to-back birdies on the 8th and 9th, she hit the turn in 36 (-1) before getting to work on the back nine, making four birdies in a homeward nine of 31 strokes.

“I played really well because the whole front nine was tough. When we woke up, I wasn’t sure we were going to be able to play, we warmed up in the dark and I was 50% sure we wouldn’t be able to play but then we ended up getting out on time so I felt like I didn’t have much time to think about it. I just went out there and now I signed my score card, I realised I shot five-under-par.”

Blissfully unaware of her prowess, this is the fourth event from 12 this year that she has opened with a round of 67 or lower and, having challenged last week in Saudi Arabia, one can’t help but feel if she keeps knocking on the door, she might just burst through soon.

“I need four rounds like this, today my driver was really good, and it is definitely easier to get close to the pins from the fairways. I am going to have a nap now and do some practice later.”

A serial grafter on the range and methodical worker out on the course, Nuutinen has not missed an event all year and has even played on the LETAS in off weeks. Looking ahead to the break she commented,

“I am not happy about the end of the season at all, I love competing, but I will work hard over the break I can’t wait to see the schedule.”

Another player that keeps knocking on the door, is Scotland’s Kelsey Macdonald. The veteran Scot witnessed one of her best friends Amy Boulden win in the summer and has shown signs of form all month with a top ten in Dubai and a 12th place finish in the individual standings at the Saudi Ladies Team International.

Hitting 17 greens in regulation on her way to a bogey-free 68 (-4), the 30-year-old is currently in solo second place and is enjoying having her friend and professional golfer George, on the bag.

“I have been happy with my game for a while now, I just need to back myself more. Having George on the bag has been a great addition and since his season stopped in Asia, because of COVID, he hasn’t been able to get back playing so that’s been a huge help for me as he has been available for these key weeks.”

Present on the 18th green for Boulden’s win and the ensuing celebrations, Macdonald’s own game was given a mighty boost by the victory as she looks to cap a successful year of her own.

“It was amazing watching Amy, but I knew it was coming. Now it is about the next win! I had amazing feelings watching her win and it definitely makes you keep believing that hard work will always pay off.”

Sitting in third place at three-under-par, but with eight holes still to play of her first round, is 2019 Order of Merit winner, Ester Henseleit. The German will return at 8.30am to complete her opening round along with the other 16 groups that were unable to finish.

Spain’s Luna Sobron continued her fine form, returning a round of 70 (-2) to sit in T4 alongside the likes of Race to Costa del Sol leader Emily Kristine Pedersen (who has completed ten holes), Celine Herbin and Karolin Lampert.

Check out the leaderboard HERE