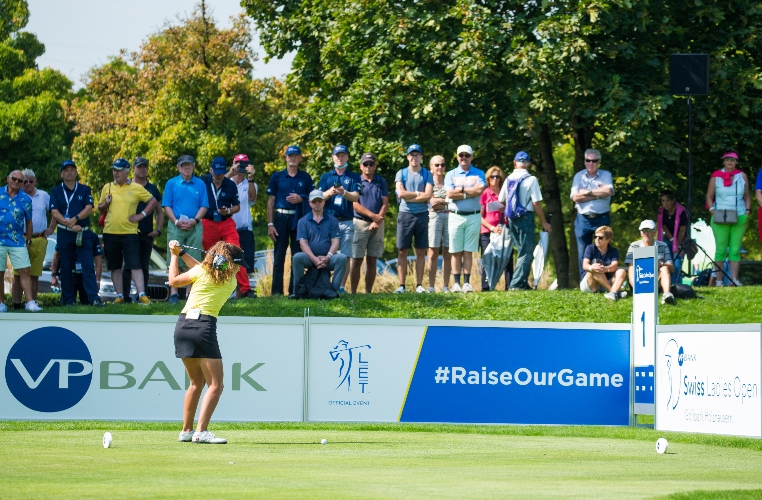 Overnight leader Sanna Nuutinen continued her quest to add a second Swiss trophy to her cabinet, adding a second round of 68 (-4) to her opening effort of 66 (-6) to take a one-shot lead heading into the final round at the 2020 VP Bank Swiss Ladies Open.

Leading by one from Welshwoman Amy Boulden and Morocco’s Maha Haddioui, the three-time LETAS winner is playing some of the most consistent golf of her career right now, recording her eighth straight under-par round, with seven of those falling in the 60s.

A winner last week on the LETAS at the Flumserberg Open, Nuutinen is still in search of her breakthrough LET win but was quick to identify a reason for her current form.

“I didn’t make many mistakes today, apart from the 17th, which was my only bogey of the day. I woke up this morning and told my roommate, it is just another day of golf. This is my fifth event in a row so every day, it’s just another round of golf for me, I don’t know anything else at the moment.”

As is the theme every week on the LET, putting and momentum mean a lot in this game and Nuutinen has both on her side. After her only bogey of the day, the Finn bounced back immediately with vengeance on the 18th, rolling home from 10ft for a closing birdie, giving her a vital one-shot lead.

“I’d be lying if I said I wasn’t thinking about the win tomorrow, of course it will creep in to my mind but I am still working on a drill on my swing, I haven’t been result orientated so I like to keep it that way.”

With average scoring for the 126-player-field lower than the opening day, a revived Amy Boulden, Race to Costa Del Sol leader Emily Kristine Pedersen and Morocco’s Maha Haddioui made the most of the weather, firing ‘best of the week’ rounds of 65 (-7).

Boulden, by contrast to Pedersen, has not been enjoying quite the same run of form as the powerful Dane but with a sparkling bogey-free 65, she moved into contention for the first time in a few years, showing the sort of golf that saw her burst on to the scene in 2014 after a glittering amateur career.

“It has been one of my goals this year to get back into contention and see how I handle the pressure.”

Working hard on her game during lockdown and in recent weeks with her coach and boyfriend, the highlight of her round came at the par five 17th, where the Welsh star made eagle from 8ft to get to nine-under-par for the tournament.

“This week I’ve holed a lot of really good putts, especially inside 10ft which have been crucial. Liam has helped me understand why it doesn’t always transfer over from practice and I have been playing a few mental games in preparation for this week.”

Lurking ominously close behind in T4 at eight-under-par is Race to Costa Del Sol leader Emily Kristine Pedersen, who has been unstoppable over the last few weeks – with a string of top-10s and a victory at the Tipsport Czech Ladies Open.

The 24-year-old Dane was on fire again tee to green, achieving the rare-feat of recording three eagles in one day.

Chipping in from just off the fringe on the third hole for her first of the day, Pedersen rolled home from 30ft on the tenth before hitting one of the shots of the day, a three-wood to 4ft on the 16th to set up a rare trio of threes on her scorecard that included no fives.

“The round was quite like yesterday; I was in lot of good positions off the tee and gave myself a lot of chances that are just missing. I didn’t really have a target score to get to, but I wanted to hole some more putts, I’m looking forward to trying again tomorrow.”

Home favourite Kim Metraux recovered from a couple of early bogeys, making four birdies from the sixth hole to shoot a two-under-par round of 70.

69 players made the final round cut which fell at two-over-par.