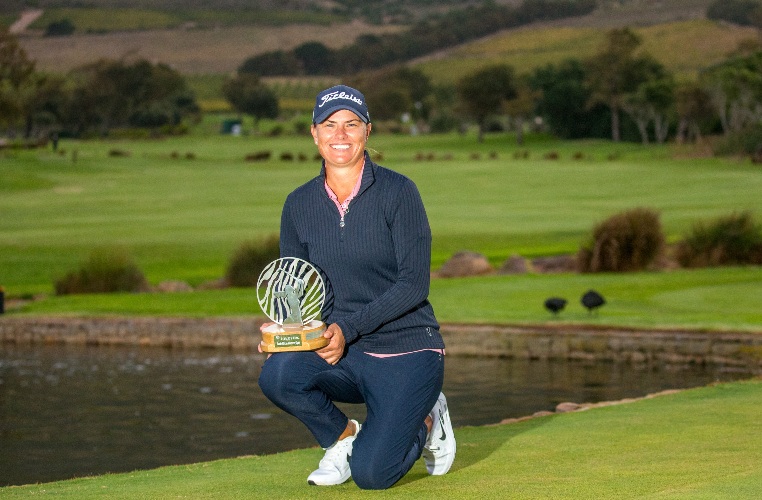 The duo were locked at level-par after 72 holes, as overnight leader Becky Brewerton slipped out of contention after a final round 78 (+6), before heading down the 18th six times until Pace edged out the Argentinian.

The local talent started the day seven shots behind the leader, but the Cape Town native played the conditions superbly throughout the day, as she registered a final round score of 70 (-2) to put herself into contention alongside Simmermacher, before a bogey from Brewerton saw her miss out on the playoff.

And with the sun starting to set over Table Mountain, both players pulled out a number of spectacular shots to keep the contest alive, before Simmermacher’s approach hit the water, leaving Pace with a two-putt to win, and she made no mistake.

And with her 11th LET victory Pace also earned herself a place at the US Women’s Open later in the year, making it a double celebration for the South African star in front of her home crowd as she retained her title from 2021.

“I’ve been struggling on the greens all wind, I’ve been hitting so many greens all week, and everything came together except the putter, and nothing wanted to drop, but when it really counted it did on the last hole.”

Pace kept things cool for the first part of her round in Cape Town, but a terrific turnaround on Saturday saw her put herself back in contention, with pars all through the front nine, before birdies on 10, 12 and 16 putting her back among the conversation, albeit with a dropped shot on the 11th.

Meanwhile, Simmermacher had led after the first round in Cape Town, but found herself alongside Pace on +2 heading into the final day, with a third round 77 (+5) seeing her drop down the standings in the breezy conditions.

Birdies on five and nine put the Argentinian in contention, before two bogeys and two birdies in the back nine saw her complete the day in 70 shots and set up a nail-biting finale.

The par-five 18th had been causing issues for players all week, with the tight green and water on the right-hand side meaning there was all sorts of trouble to be avoided, and as such, both players kept things fairly routine for their opening three goes down the last, with pars apiece every time.

Then with the tee box moved forward 75 metres, things started to get interesting, with both players chasing the green in two. A miraculous bunker escape from Simmermacher then forced a fifth playoff hole, before two fantastic approaches and putts saw the duo head back to the tee for a sixth time.

And that’s when the pressure eventually told, as Simmermacher hit her second into the water, paving the way for Pace to two-putt her way to victory, and she made no mistake – earning herself a record fifth Investec South African Women’s title in the process.

“I needed that birdie on ten, I was getting a bit frustrated with my putts not going in, I missed the shot off the green and got a bit lucky, but I got it on the green and holed the putt, so that gave me some confidence coming in,” Pace continued.

“The 11th was always going to be a tough hole, whether you go in with a wedge or go for the green. I decided to go for it and had a terrible lie, I had to hit it, but I backed off it a bit unfortunately.

“Nobody likes to see what happened to Becky, it’s very disappointing for her, but it’s so great to see her back at the top and back playing up there where she belongs.

“And that bunker shot Maggie played was unbelievable, she didn’t have a good stance and it was very intimidating, but she stuck it. I blasted a couple past but at least I made the return putts.”

Overnight leader Becky Brewerton couldn’t hold onto her lead in Cape Town, as the Welsh star failed to capitalise on her five-shot advantage heading into the final day, with a round of 78 (+6) seeing her end the day a shot behind the leading pair.

Dropped shots on three, four, seven and eight saw her reach the turn in 40, before two birdies on 11 and 12 looked to have turned her day around, with her lead extending to three shots as she reached the home stretch.

But she couldn’t keep the chasing pack at bay, with bogeys on 13, 15, 17 and a final one on the last seeing her finish in third spot on +1 for the week, and despite failing to take the win, she will be mightily pleased to be back among the leading pack once again.

Further down the rankings, Casandra Alexander and Felicity Johnson finished in a tie for fourth on +3, as the South African went round in level-par for the day, while English star Johnson shot 74 (+2) in her final 18 holes.

Agathe Sauzon also shot level-par to take standalone sixth on +5, while four players shared seventh position after finishing on +6 for their week’s efforts.

Seventh place for Grant was also enough for her to seal the Investec Order of Merit title, with three victories in South Africa to start the year, with the win in Johannesburg adding to successes at the Dimension Data Ladies Challenge and Jabra Ladies Classic in February.

“I just had the best couple of weeks here, I’m glad that I decided to come for eight weeks and start my season over here,” Grant said.

“I’ve met some great people, including Lee-Anne, I’ve had the best time and played some great golf as well.”

Victory in Cape Town takes Lee-Anne to the top of the 2022 Race to Costa del Sol rankings, as she sits on 681.67 points, with Grant in second-place on 586.25 points following her T7 finish in Cape Town.