Florentyna Parker maintained her two-shot overnight lead in the Lalla Meryem Cup after a third round 72 in breezy conditions on the Blue Course at Royal Golf Dar Es Salam in Rabat, Morocco, on Saturday.

At six under par, the 26-year-old Englishwoman remains two strokes ahead of compatriot Liz Young, who was joined by Ladies European Tour rookie professional Nuria Iturrios from Spain on four under par heading into the final round.

It was a dogged and determined performance from Parker, whose short game kept her level through six holes. Her patience finally paid off when she birdied the seventh to move three shots ahead. Out in 35, she bogeyed the 11th but recovered with a birdie on 13 before dropping another shot on 17 to come back in 37.

“I am happy with my score but the first nine were so up and down it was incredible: I was holing putts from everywhere,” said Parker, the winner of the 2010 ABN AMRO Ladies Open and 2014 Italian Open. “The back nine calmed down playing wise but I didn’t score as well. I made two bogeys and a birdie on 13. To be honest there aren’t many score boards out there but obviously playing with the other two, you can tell how people are scoring. Liz and I shot level par and I think it was a good score out there because it was really windy and sometimes hard to tell where it was coming from.” 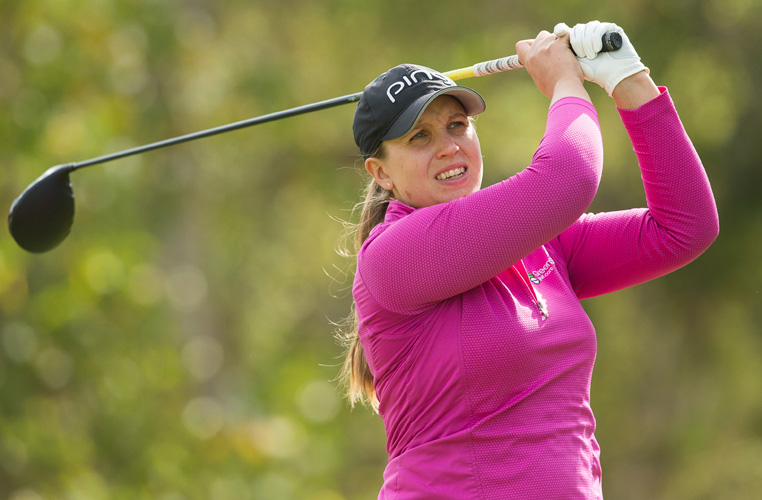 Young went out in 36 after a birdie on the second and bogey on the fifth and it was a similar story on the back nine as she birdied 13 and dropped a shot on 17. The 33-year-old eighth season LET player from Hampshire, who has twice finished in fourth place, in Scotland and Slovakia, is targeting her first podium finish on Sunday, although at four months pregnant, she was so exhausted after her second round that she fell asleep on the journey back to her hotel.

She said: “I’m feeling even more tired but I was pleased with my level par round today. I actually hit the ball well. It was pretty uneventful with two birdies and two bogeys and I just didn’t hole as many putts as I had done on the previous rounds.

“Now I’ve finished early I’ll do exactly what I did yesterday: go back and rest and tee it up tomorrow and hopefully have another good round.” 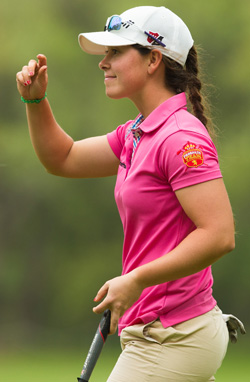 She shares second with Iturrios, who is playing in only her second LET event having tied for 24th in New Zealand in February.  The 20-year-old Majorca is excited to be back in Morocco, where she finished fourth at Lalla Aicha Tour School in December. Iturrios described the experience as ‘strange’ and added: “I don’t have any expectations for this week, I just want to play my golf and enjoy it.”

Frenchwoman Lucie Andre and Finland’s Noora Tamminen share fourth on three under par while a further three players are a stroke further back and only four from the lead heading into the final round. They are 17-year-old rookie Angel Yin from the United States, Finland’s Krista Bakker and Isabelle Boineau from France, all of whom are yet to win on the Ladies European Tour.