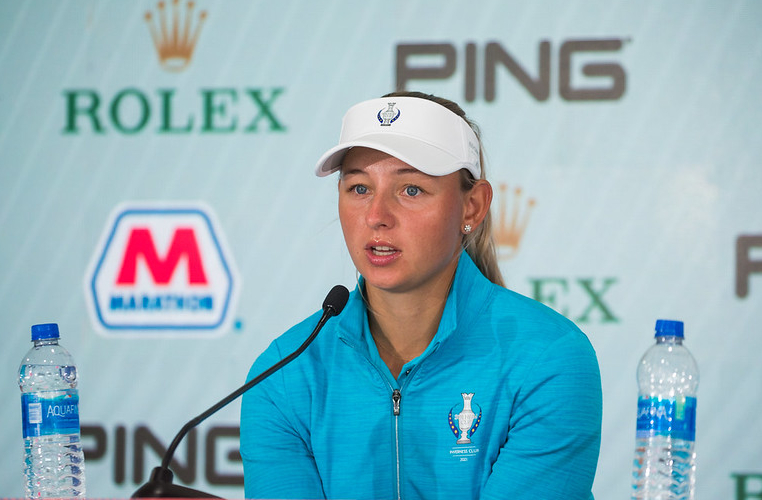 2021 marks a historic first for Danish golf, with Emily Pedersen and Nanna Koerstz Madsen becoming the first Danes to compete on the same Solheim Cup team.

The duo joins four-time European Team member Iben Tinning as the only three Danes to represent their country in the elite competition.

“It shows that the Danish Golf Federation and especially the girls are doing super well,” said Pedersen, who made her Solheim Cup debut in 2017. “I think it’s something to be proud of in Denmark, and I’m proud. I’m sure Nanna is proud, as well, to be here and represent the red and white.”

Pedersen and Koerstz Madsen both come to Toledo looking for redemption, albeit for different reasons. Four years ago, Pedersen went 0-3-0 at the Solheim Cup in Des Moines, an experience that she admits sent her into a career spiral and out of the LPGA Tour.

Now a multiple winner on the Ladies European Tour and the 2020 LET Race to Costa del Sol winner, Pedersen says she’s in a much better place, both professionally and personally.

“I think I’m a lot more mature now than I was four years ago. I think obviously I’ve grown from going through a bit of a tough time after the last Solheim,” said Pedersen. “I think I’m more assured of myself, more confident in myself. I feel like I’ve also played some better golf than I had before the last Solheim. I’ve had four wins since then.”

Just two weeks ago, Koerstz Madsen went to the 72nd hole of the AIG Women’s Open with a chance to win her first major, but instead settled for a tie for fifth after a disastrous bunker shot left her with a closing double bogey. The same day, she was named to her first Solheim Cup team, a quick balm to that major disappointment.

“I’m most looking forward to the first tee and seeing how the crowd is going to be. Just today it was really cool with the music and some people there. So that’s what I’m looking most forward to,” said Koerstz Madsen. “I know it’s going to be exciting to play out there. I’m probably going to be a little nervous, which everyone else is going to be, so I just hope I can cope with those emotions, which I’m sure I will.”