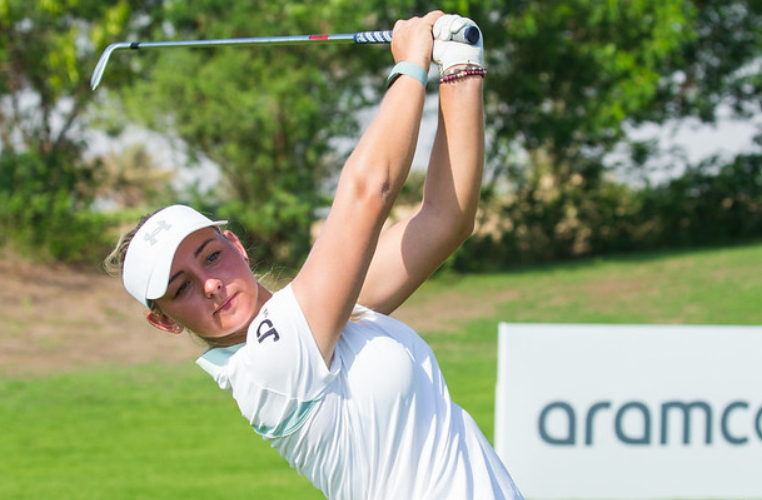 Defending champion Emily Kristine Pedersen is back at a golf course where she found success as she returns to Saudi Arabia and the scene of her triumph in 2020.

At least year’s inaugural edition of the Aramco Saudi Ladies International presented by Public Investment Fund, the Dane won the tournament beating Georgia Hall in a playoff before going on to claim the individual and team titles at the Saudi Ladies Team International.

After heading back to Royal Greens Golf & Country club, the 2020 Race to Costa del Sol champion is excited to tee it up once again.

“It feels great to be back. I have a lot of good memories from here and as I am walking the course, there is constantly shots and good shots that I remember from last season, so it is good to be back,” said the five-time LET winner.

Since last year’s tournament, the 25-year-old was crowned the Race to Costa del Sol champion for 2020 and rolled in the winning putt at the 2021 Solheim Cup for Team Europe.

But her mindset for the two weeks in Saudi Arabia, which sees the LET host the Aramco Saudi Ladies International followed by the Aramco Team Series – Jeddah, will be similar for both events.

She continued: “The mindset changes a little bit between the individual and team event because you might cheer a little bit more for other players than you usually do. But at the end of the day, I’m just trying to do the best that I can every week individually and hopefully that’s good enough to contribute to the team score too.”

The 18-year-old has won two LET titles this season – Tipsport Czech Ladies Open and VP Bank Swiss Ladies Open – and has the opportunity to clinch the Race to Costa del Sol crown this weekend.

“It is my first time in Saudi Arabia. It is really nice here. I think it’s similar to Dubai and the weather has been pretty similar too. The course is in good condition – it’s in pretty good shape and I think the putter is key this week. There will be more chances and I think it will be more important,” explained Thitikul, who is 27th in the Rolex Women’s World Golf Rankings.

“I’m still working on my putting because I’m not quite there yet. I think I have more confidence with what I’m doing, it’s not at the point that I want it yet but hopefully it will be soon.

“It would mean a lot to me to win the Race to Costa del Sol, it would mean the world because it’s my first year, my rookie year outside of the country [Thailand] by myself without my dad and without my parents just my caddie and manager. It has been a good year, challenging with Covid-19, so it would be great to win it.”

A stellar field has assembled for the Aramco Saudi Ladies International with five members of the 2021 European Solheim Cup team in attendance.

World number seven Lydia Ko is in the field and will tee off alongside Hull and Pedersen at 7.18am local time and the New Zealander has enjoyed her week at Royal Greens so far.

“This is my first time here and first time at this golf course,” she said. “It is really nice and has a good blend of some tougher holes and some holes that are pretty gettable. I think the midday/afternoon wind is a huge factor here but at the same time it cools the temperature down, so I would take the wind.”

While Australian Minjee Lee, who won the Amundi Evian Championship in July, will be playing with Skarpnord and Ciganda.

Last year Morocco’s Maha Haddioui made history by becoming the first Arabic woman to compete in Saudi Arabia and the 33-year-old is enjoying being back.

“Last year was already a great thing and I was really proud to see young women take up the game. Coming from the Morocco and seeing women’s golf evolve like this in the Middle East is great and seeing girls that were just learning how to play a year ago play in the Pro-Am today with me was amazing,” explained Haddioui.